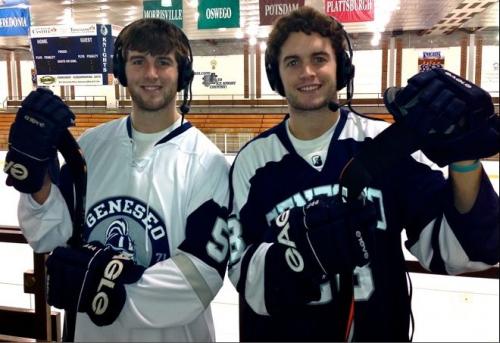 From Islandia, Suffolk County, the duo brings more than enthusiasm for the game to broadcasts. Both have keen knowledge of the sport as former players: Brian, 23, played for St. Anthony’s High School in South Huntington and three years of junior-league hockey in New Jersey. Casey, 20, played for St. Anthony’s and in a travel-hockey league. He also played baseball in high school and is currently a member of Geneseo’s club hockey team.

Though both are junior communication majors and roommates, and they share a resemblance to one another, they’re not twins, as some people mistakenly presume. The pair started college together, in 2010, due to time Brian spent, after completing high school, playing in juniors.

“We researched Geneseo together and applied on the last possible day — ‘at the buzzer,’ if you will,” Casey says. “When we realized we’d be at Geneseo together, the first thing we talked about was how cool it would be to have a radio show together or call the hockey games.”

In fact, they do both. The McCormacks also partner on WGSU talk shows, including “Knight Watch,” a Geneseo hockey program, 6–7 p.m. Thursdays; and “The Gigglin’ Pigs,” a sports-banter show (with three other members), 7–8 p.m. Wednesdays. A third talk show, “The Two-Man Advantage,” focusing on the National Hockey League, is on hiatus due to the NHL lockout. During freshman year, they teamed up on Geneseo men’s hockey pre-game and intermission shows.

“We’ve been sharing a room for 20 years now — so the conversations we had falling asleep, now we just say into a microphone. It transfers over pretty naturally,” says Brian, who was color commentator on WGSU hockey broadcasts last year (with play-by-play partner Erik Talbot, who graduated in May).

The siblings called their first game together on Oct. 18.

“Brian and Casey are a great asset to our program,” Geneseo Ice Knights Head Coach Chris Schultz says. “They both know the game very well and can translate the happenings on the ice to our followers in a knowledgeable way. They’re a part of our family, through and through.”

“You won’t find many radio teams made up of brothers — on any station, covering any sport,” says Mike Saffran, SUNY Geneseo communication lecturer, and WGSU faculty director. “It makes Brian and Casey unique — but it’s their passion for and knowledge of hockey that makes them a great young broadcasting team.”

As seniors next year, the pair most likely will broadcast Geneseo games again — but possibly not as a duo. Another brother, Patrick, a senior at St. Anthony’s High School, is considering joining them next fall at Geneseo — potentially leading to a McCormack “hat trick,” on campus and on the air.

“Hockey has been a huge part of our family,” adds Casey, who has skated since age 5. “Brian and I have dedicated more than 15 years of our lives to hockey and we’re so passionate about it. It’s really special that we can do something like this together.” 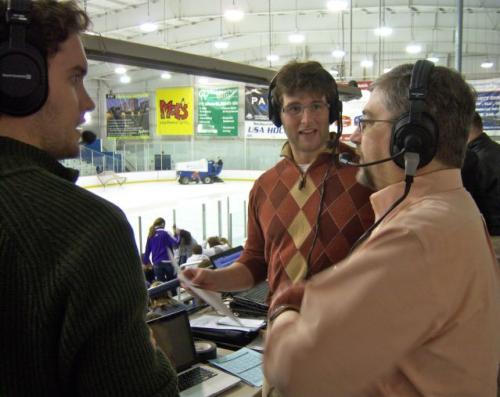