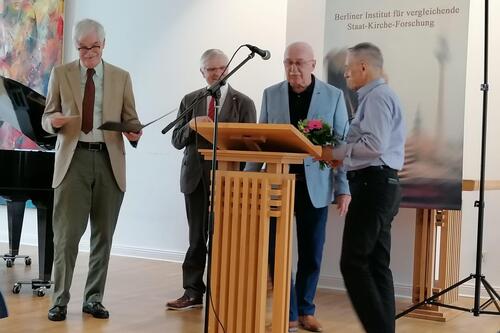 Dr. Robert Goeckel (left) is presented with the Horst Daehn Prize in Berlin on May 28, 2022.
Political Science and International Relations News

Distinguished Professor of Political Science And International Relations Robert Goeckel received an honorary award in Berlin, Germany, on May 28: The Horst Daehn Prize for Contributions to Study of Church and State in Eastern Europe.

The invitation to the event read as follows:

On the occasion of the 29th anniversary of the founding of the Berlin Institute for Comparative Church-State Studies and in cooperation with the Ursula and Horst Daehn Foundation, in memory of the co-founder and director of the Institute, Prof. Dr. Horst Daehn, we are proud to announce the award on May 28, 2022 in the St. George Hall of the Evangelical Forum City Center, Klosterstrasse 66, Berlin at 11am of the Horst Daehn Prize 2021 for his achievements in the research of the history of the churches in the GDR and the SED policy toward the churches, as well as the history of the Baltic churches during the period of Soviet rule, the Institute awards to Prof. Dr. Robert F. Goeckel (USA). All are warmly invited.

Signed, Joachim Heise, Institute Director and Chair of the Ursula and Horst Daehn Foundation and Bishop emeritus Axel Noack, Chair of the Society for the Promotion of the Comparative Study of Church and State.

Robert F. Goeckel has taught international relations and comparative politics at SUNY Geneseo since 1982 and has specialized in European politics, Germany and Eastern Europe, and region of the former USSR.

In this context he specializes in the relations between church and state and the role of the churches in Communist and post-Communist systems. Fluent in both German and Russian, Goeckel has spent considerable periods of time in Berlin and Moscow and conducted extensive research in the archives of both the former GDR and the former USSR.

In 2000-2001 Goeckel was director in Moscow of the Center for the Study of the US and Russia, created by SUNY and Moscow State University. Based on this experience, he led student exchange groups in the program “Geneseo in Moscow” during the years 2004-2012.