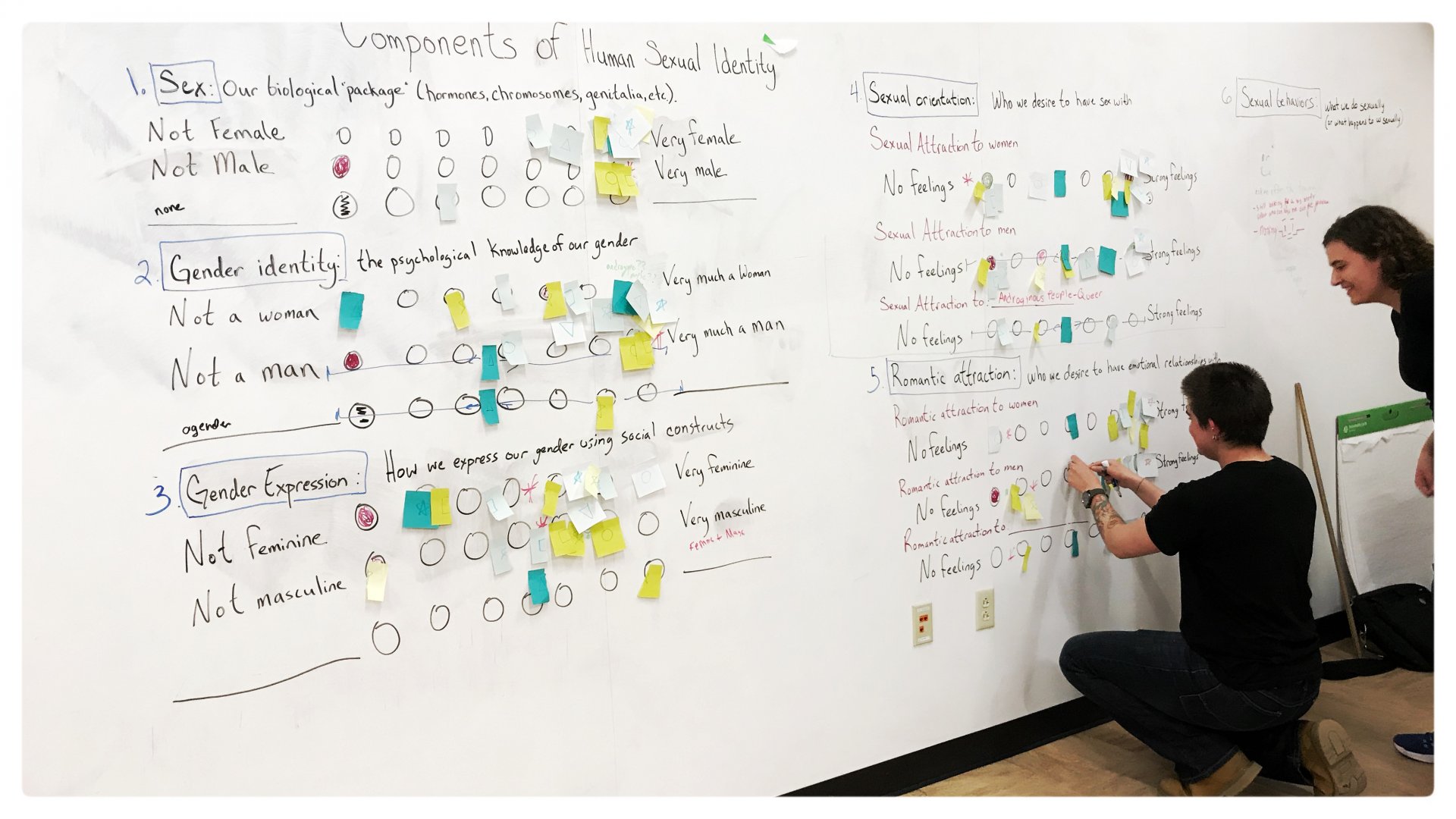 This is a short primer, for more definitions, visit this link.

While our community is often referred to as the “LGBT” community by various sources, there are many identities that exist within it which aren’t necessarily represented by the L, G, B, or T.  However it does not make those identities any less important! While many have tried to be as inclusive as possible in creating an acronym or word to represent every member of the “LGBTQ+” community, as of yet there is no perfect or all-encompassing single term. Historically, the initials were re-ordered to be more inclusive in the early mid-2000s.  And although the “queer” community is used often as an umbrella term, some find it abrasive because of the word’s derogatory history. Thus, the “LGBTQ+” acronym often becomes an alphabet of terms that grows as new terms continue to appear and are included.  "LGBTQ+" is the acronym currently in favor at the time this page was authored. This acronym will be reviewed, updated, and changed to reflect the collective self-identity of the community as we all grow, learn more, and continue to embrace inclusivity while attempting to prevent confusion.  This is a constant process.

While we see evolving vocabulary as a good sign that people are becoming more comfortable with defining their identities, the potential trouble with this is the number of terms to remember. Many definitions might even change from person to person, or even over time due to the evolving nature of the community as cultural acceptance and acknowledgement of various identities grow! Still, it is best to at least know the basics; that said, if you are ever in doubt, there are several resources on campus where you can readily access!

So, what are some of the basics you need to know?

L: Lesbian. Describes a person who identifies as a woman who is sexually and/or romantically attracted to other women.

G: Gay. An adjective used to describe people whose physical, romantic, emotional, and/or spiritual attractions are to people of the same sex. In contemporary contexts, the term is more commonly used to describe the population who identifies as men who are sexually and/or romantically attracted to other men.

B: Bisexual. This is an umbrella term which describes people whose sexual and/or romantic attractions are not limited to one sex and/or gender.  The specific way people experience these attractions may further be specifically identified by the individual using terms such as pansexual, etc.  It is an open and inclusive word which describes a diverse group of people with a wide variety of experiences around same-sex and different-sex attractions.  Individuals may experience this attraction in differing ways and degrees over their lifetime.

T/T*: Transgender/Trans*. Transgender typically refers to people who move away from the gender identity associated with the sex they were assigned at birth and/or their biological sex.  The term transgender is not indicative of gender expression, sexual orientation, hormonal makeup, physical anatomy, or how one is perceived in daily life. Trans* is an umbrella term which covers a variety of genders outside of the societal norms or expectations of gender, specifically including gender identities which may not be viewed as binary - as in, not expressly male or female.

Q: Questioning. Questioning is an adjective that describes a state of being where an individual feels unsure (however privately or openly) of the orientation/identity that they have either asserted for themselves, or been brought up as.

Q: Queer. A term which has been reclaimed by some people of marginalized gender identities and sexual orientations to describe themselves.  Queer has been used as an offensive term historically, but in the modern context this term is used for many reasons, including its defiance.    It is also used in academic contexts because of its use to describe the community in a single term, and can be, but not always is, inclusive of those who are not cisgender and/or heterosexual.
[Disclaimer:  Some people are very uncomfortable with this term.  It is important not to use any term to identify specific individuals if they are not comfortable or choose not to identify with a particular term(s).  Additionally, it is considered highly derogatory to use the grammar articles “a” or “the” to prefix the term Queer.]

I: Intersex. Describes a person who is born with reproductive, sexual, or chromosomal anatomy which are not singularly displaying female or male sexual characteristics. The term intersex is not interchangeable with or a synonym for the word transgender (although some people who are intersex may also identify as transgender).

A: Asexual. Describes a person who does not experience sexual attraction to others.  Asexuality is an orientation, and is different from celibacy.  Celibacy is not having sex by definition, but someone who is asexual still may engage in sexual behavior despite a lack of sexual attraction.  Additionally, a person who identifies as asexual may readily be involved in romantic or other types of intimate relationships.

A: Ally. A person who is a member of the dominant or majority group who works to end oppression in their personal and professional life through support of, and as an advocate for, the people from historically oppressed groups which are not their own. Allies may be found within marginalized groups but, by definition, they are assisting and advocating for people whose identities do not align with their own specific identity(ies).

2S: Two-spirited.  A term associated with a modern interpretation of the synthesis of various indigenous Native American cultures and spirituality, usually referring to individuals who fulfill a traditional third-gender (or other gender non-binary) role in their cultures, possessing both male and female spirits.  It is cautioned that use of this term by anyone who does not identify as a member of any of the diverse Native American communities may be considered engaging in an act of cultural appropriation.

+: Any other orientation or identity not included above.

Please note: These definitions are not all-encompassing and are not always the definitions used by those who identify with the identities described by the terms listed - for example, there are persons who are non-binary but also identify as lesbians.  Additionally, due to intersections of identity, several identities and terms may express simultaneously in a person.  It is very important to respect people’s desired self-identifications.  None of us should never assume another person’s identity based on a person’s appearance and/or from our own assumed perceptions.  It is always best to ask people how they identify, including what pronouns they use, and to respect their dignity by engaging and acknowledging their stated identity.