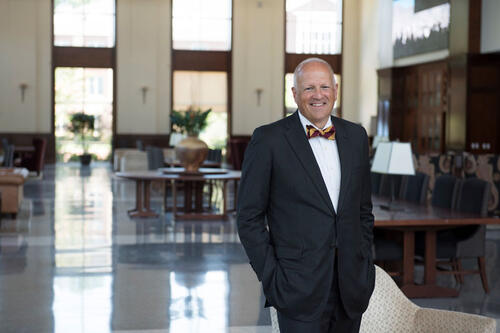 Geneseo’s undergraduate commencement will feature a keynote by Leo M. Lambert ’76, PhD. The undergraduate ceremonies are Saturday, May 16 at 10 a.m. and 2 p.m. in the Ira S. Wilson Ice Arena.

Leo M. Lambert is a professor and president emeritus of Elon University, in Elon, NC, where he served as president from 1999 to 2018. During his tenure, Elon’s professional schools of business, law, health sciences, communications, and education achieved top accreditations and distinctions, and the campus grew tremendously with the addition of more than 100 buildings. A Phi Beta Kappa chapter was established in 2010 following major investments in arts and sciences programs, world languages, honors, and faculty scholarship. Today Elon is recognized widely for excellence in experiential learning, including its programs in study abroad, undergraduate research, civic engagement, and interfaith cooperation.

Lambert is the co-author of The Undergraduate Experience: Focusing Institutions on What Matters Most (Jossey-Bass, 2016) and Relationship-Rich Education: How Human Connections Drive Success in College (Johns Hopkins University Press, 2020). A recognized leader in higher education, he currently serves on the boards of the Association of Governing Boards, The Washington Center, and the John N. Gardner Institute for Excellence in Undergraduate Education and has previously served on the boards of the American Council on Education, the Association of American Colleges and Universities, and the National Association of Independent Colleges and Universities. He is also a senior fellow for religious pluralism for the Aspen Institute’s Inclusive America Project and the Interfaith Youth Core. In 2009, he received the inaugural William M. Burke Presidential Award for Excellence in Experiential Education from the National Society for Experiential Education.

Lambert earned a bachelor’s degree from SUNY Geneseo, a master’s from the University of Vermont, and a doctorate from Syracuse University. He holds honorary doctoral degrees in humane letters from both Geneseo and Jacksonville University.