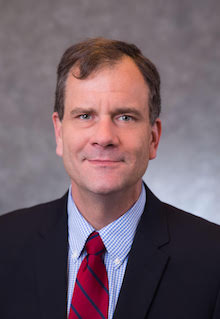 Jeremy Grace has been a member of the Geneseo faculty since 2000. He is also the coordinator of the International Relations program.

Jeremy Grace is a lecturer of international relations and director of the IR program at SUNY Geneseo. He received his M.A in International Affairs from American University in Washington DC in 1995. Prior to joining the Geneseo faculty in 2000, he worked for four years designing democratization and elections programs with the Organization for Security and Cooperation in Europe (OSCE) and International Organization for Migration (IOM) in Bosnia and Herzegovina, Kosovo, and East Timor. He has published studies and discussion papers for the IOM, IFES, and the World Bank, and served as Senior Advisor to the IOM Political Rights and Enfranchisement System Strengthening project aimed at protecting the political rights of refugees and conflict-forced migrants. As part of the project, he has provided technical assistance related to peace building, refugees, and democratization to national governments and international organizations through field assessments to Kosovo, Liberia, Uganda, Nepal, and Afghanistan, among others.