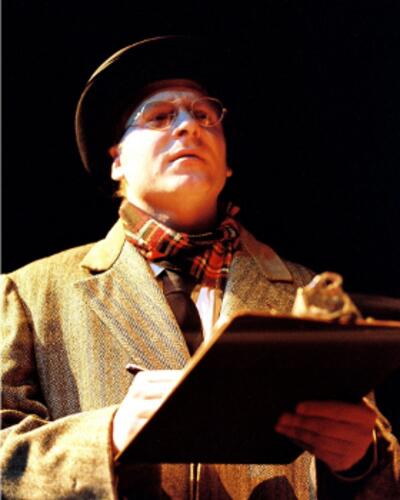 Ray Boucher has performed for almost twenty years in the United States and abroad, including many of the theatre companies in the Buffalo area: Red Carpet (Tuesdays with Morrie), Studio Arena Theatre (The Mystery of Irma Vep), the Alleyway Theatre (Transference, The Seabirds, A Christmas Carol), The Irish Classical Theatre (The Cobbler), Shakespeare in Delaware Park (Hamlet), The New Phoenix Theatre (The Metamorphosis, Blue/Orange), The Jewish Repertory Theatre (Kindertransport), and most recently, The Buffalo Laboratory Theatre, where he was seen in The Machine Stops, Terra Nova and Rosencrantz and Guildenstern Are Dead. In New York City, he performed in Much Ado About Nothing and co-founded The Walter Carlson Players. Besides acting, Ray spent some years doing sketch and stand-up comedy in New York City at such clubs as The Gotham City Club, The New York Comedy Club and The Comedy Cellar. He also wrote, directed, and starred in a sit-com in Beijing, China. Mr. Boucher studied at SUNY Brockport (BS, Theatre Arts and Literature) and SUNY Cortland (MA, Literature). He also did postgraduate work in the School of Education at SUNY Buffalo. He has delivered scholarly symposiums under the titles "Cracking the Voice: Teaching Voice in High School Writing"; "Otello meets Othello: From Cinthio to Shakespeare to Verdi"; "The Enchanted Island or The Play is the Thing: The Tempest Meets A Midsummer Night's Dream". As well, Mr. Boucher has taught in Theatre and English programs in China and South Korea.