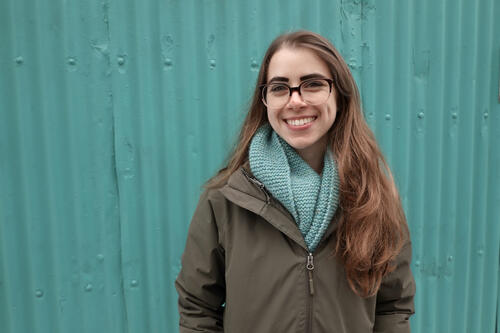 Rachel Britton '18 has won Fulbright Award to study at the University of Iceland in Reykjavík. (Photo provided)

Rachel Britton ’18, who earned her bachelor’s in English with a concentration in creative writing, has won a 2020–21 U.S. Student Fulbright/Icelandic Ministry of Education and Culture Award. She will study modern Icelandic at the Árni Magnússon Institute for Icelandic Studies at the University of Iceland in Reykjavík, focusing on the morphology, syntax, and phonetics of the language through old and modern literature, as well as the history of Iceland from settlement to modern times. The Fulbright U.S. Student Program provides grants for individually designed study or research programs, or English teaching assistant programs, in many foreign countries.

Britton’s love affair with Iceland began in a lecture during Geneseo’s Cultural Harmony Week in 2015. “The speaker described the ability of some Icelanders to see beyond the physical world, a state she referred to as skyggnigáfa,” she said. “Running the syllables over my tongue, I fell in love with the Icelandic language, the same way I later tripped and fell on the basalt of the Álfagjá Rift Valley: all at once.”

During her senior year, Britton joined a four-week study abroad program in Iceland, led by Lytton Smith, associate professor of English and creative writing, and Nick Warner, assistant professor of geological sciences, for a course that combined geological sciences, creative writing, and environmental studies. “Iceland had a way of reminding me of my weaknesses while I studied there,” she noted. “The rock was much sturdier than I, and the mountains much greater. That month in Reykjavík, I challenged myself to really learn the language.”

Although she had studied Icelandic previously, using online tools to develop her own dictionary, her studies with Smith—an Icelandic translator—introduced Britton to the breadth of Icelandic literature. “I immersed myself in the Sagas, the Poetic Edda, and contemporary poetry, and was especially intrigued by Vala Hafstað’s Eldgos í aðsigi/Imminent Eruption. Hafstað, who lived in the United States for decades, reveals both the differences and constants between the two cultures and landscapes.” In 2019, Britton began formal, distance tutoring with Icelandic writer Hildur Loftsdóttir. As her language skills improved, she incorporated more Icelandic into her poetry, “experimenting to bring English into a bilingual literary conversation.”

Smith is an award-winning author of four books of poetry and several translations from the Icelandic, including Jón Gnarr’s childhood memoir trilogy, The Ambassador by Bragi Ólafsson, Children in Reindeer Woods by Kristín Ómarsdóttir, and Guðbergur Bergsson’s Tómas Jónsson—Bestseller. In 2019, he received a National Endowment for the Arts Translation Fellowship.

“I have no doubt that the support of a Fulbright grant will launch Britton’s career as a life-long translator of Icelandic, and we would all benefit from her efforts on behalf of both Icelandic and American literary culture,” Smith said. “I am struck by the ways she is envisioning harnessing new digital technologies alongside a comforting, traditional approach to books: that which binds us together, even across the Atlantic, is often a love of sharing what we’ve read.”

Britton sees her return to Iceland as a Fulbright scholar as “a bridge through translation. My study of Icelandic will train me for literary translation and support my independent project: the creation of a digital Story Map using ArcGIS software, hosted by the Reykjavík City of Literature UNESCO website. The project will connect contemporary Icelandic poetry, in both Icelandic and English, to various Icelandic locations, in the hopes of connecting international travelers and Icelanders to the country’s literary community and culture.”

While in Reykjavík, Britton will also intern with Ós Pressan, a publisher of foreign language and Icelandic writers, where she will use her advertising and marketing skills to foster more international engagement with Icelandic literature.

“I am grateful for the professors like Dr. Smith who encouraged me to experiment, pursue my interests, and find a path where my creative interests became a career. Sometimes, I wonder how my life would look had I not come to Geneseo and am so thankful to have been part of such a nurturing and supportive community.”

After her Fulbright year, Britton plans to enroll in a U.S.-based full-residency MFA program for creative writing to complete her in-progress bilingual Icelandic and English poetry manuscript Fjallkonan, which explores “the feeling of belonging associated with the earth and human relationships, by traveling between Iceland and my home state of New York.” She will also pursue translation of contemporary Icelandic poetry into English through presses like Phoneme Media and Open Letter Books.

“To this day, I occasionally find myself saying that wonderful word skyggnigáfa,” she said. “I may not have the ability yet to see beyond the physical world, but Iceland and its literature continue to improve my poetry and obsess me.”