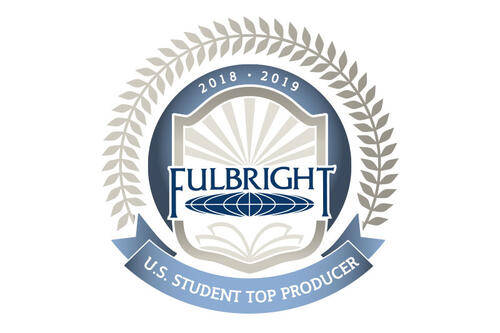 Geneseo has been named a Top Producer of U.S. Student Fulbright awards for 2018-19. (Image provided)

For the second time in the College’s history and in consecutive years, SUNY Geneseo has been named a Top Producer of U.S. Student Fulbright awards, the State Department’s Bureau of Educational and Cultural Affairs has announced in its annual article in The Chronicle of Higher Education.

For the 2017–18 Fulbright cycle, Geneseo was the first dedicated SUNY institution ever to be named a Top Producer of U.S. Student awards in any category — bachelor's, master’s, research, or special-focus four-year institutions. This is the ninth year that the U.S. Department of State has issued an annual list of Top Producer institutions in the Chronicle.

“This continued recognition is a tangible indicator of the great regard organizations like the Fulbright Commission have for our graduating seniors and also underscores Geneseo’s commitment to inspiring globally aware citizens, as reflected in our College’s Mission Statement,” said Geneseo President Denise Battles. “A great deal of praise is owed to the faculty and staff on campus who support our students’ efforts to secure nationally competitive Fulbright awards.”

This year’s six winners bring the College’s total to 26, starting with Andrew Fox ’85 (New Zealand), with 14 of those awards coming in the past three years alone and 22 awards since 2010. For the 2019–20 cycle, Geneseo tied last year’s record of 19 applications, 12 of whom won semifinalist status, far outpacing the previous record of eight semifinalists. Finalists will be announced beginning in March.

“Once again being named a Top Producer of U.S. Student Fulbright awards after being the first dedicated SUNY institution ever designated as such in 2018 is another point of pride for Geneseo. Never before has the competition for these awards been so fierce as our nation’s finest colleges and universities put forward some of their best and brightest graduates, recognizing the prestige these awards bring to the institution,” said Michael Mills, director of National Fellowships and Scholarships. “For many of our students, the Fulbright experience is a natural extension of the liberal arts education and training they receive at Geneseo that prepares them to take their places as stellar ambassadors of this country, lending their many talents and skills to the host nation.”

Also for 2018–19, two SUNY Geneseo faculty members received Fulbright Scholar Awards. This semester, Denise Scott, professor of sociology, is conducting research at the H.N.B. Garhwal University in Srinagar, India; and Jun Okada, associate professor of English, is teaching and conducting research at the Escola Superior de Teatro e Cinema, Instituto Politécnico de Lisboa, in Lisbon, Portugal. These awards bring to 11 the number of Fulbright Scholar or Fulbright-Hayes awards Geneseo faculty members have received in the past eight years. The Scholar Program offers more than 460 teaching, research, or combination teaching/research awards in more than 125 countries. Opportunities are available for college and university faculty and administrators as well as for professionals, artists, journalists, scientists, lawyers, independent scholars, and many others.

Since its inception in 1946, the Fulbright U.S Student Program has provided more than 390,000 participants — chosen for their academic merit and leadership potential — with the opportunity to exchange ideas and contribute to finding solutions to shared international concerns. More than 1,900 U.S. students, artists, and young professionals in more than 100 different fields of study are offered Fulbright Program grants to study, teach English, and conduct research abroad each year. The Fulbright U.S. Student Program operates in more than 140 countries throughout the world.

The Fulbright U.S. Student Program was created by the U.S. Department of State, funded by an annual appropriation from the U.S. Congress to the Bureau of Educational and Cultural Affairs, and supported in its implementation by the Institute of International Education. The Fulbright Program also awards grants to U.S. scholars, teachers, and faculty to conduct research and teach overseas. In addition, some 4,000 foreign Fulbright students and scholars come to the United States annually to study, lecture, conduct research, and teach foreign languages.

The U.S. Student Fulbright competition is open to students and recent alumni. It is administered at Geneseo by Director of National Fellowships and Scholarships Michael Mills, who can be reached at millsm@geneseo.edu and (585) 245-6002. More information about the Fulbright and other nationally and internationally competitive scholarship and fellowship programs can be found at https://www.geneseo.edu/fellowships_and_scholarships.