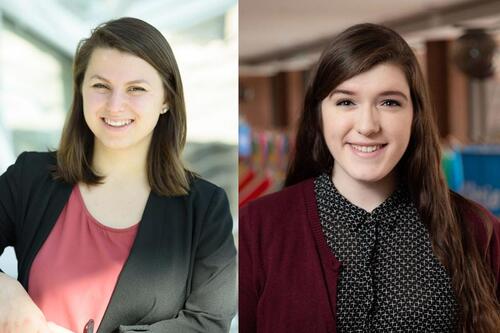 Geneseo alumna Janine “Jay” Rossi ’18 and Kelsey Kwandrans ’19 have won 2019–20 U.S. Student Fulbright awards to Uruguay and Spain respectively. Rossi, from Millbrook, NY, graduated with a B.A. in Spanish with an emphasis on Latin American studies and is presently enrolled in a master’s program at SUNY New Paltz in Teaching English to Speakers of Other Languages (TESOL). Kwandrans, from Buffalo, NY, is majoring in English and minoring in Spanish.

Rossi and Kwandrans become the 28th and 29th Geneseo student or alumni to win a U.S. Student Fulbright award. Of the College’s 29 awards, 17 have come in the past four years alone, with 25 since 2010. For the 2019–20 application cycle, Geneseo set a record with 12 of its 19 applications reaching semifinalist status, outpacing the previous record of eight.

At Geneseo, Kwandrans is a member of the Edgar Fellows Program and president of the English Immersion Group, a student organization that provides a casual and supportive environment for non-native English speakers to practice English and learn about American culture. Her work on campus as a Speech Buddy paired her with international students from Malaysia and Japan to provide one-on-one tutoring in grammar, pronunciation, idioms and slang, and cultural concepts. Kwandrans has spent time as a teaching assistant for the Orleans-Niagara BOCES program in Niagara Falls, NY, and as a tutor for Migrante Intercambio de Lenguaje y Cultura (MILC).

After her Fulbright year in Galicia, Spain, Kwandrans plans to attend graduate school in preparation for a career as an English Language Arts (ELA) or English as a New Language (ENL) teacher in adolescent education. As a high school junior, she travelled with her Spanish class to Madrid, Toledo, Barcelona, and Seville. “Those two weeks [in Spain] opened my eyes to what it is like to be surrounded by those who speak a different first language,” she said. “The connections gained through communication are very important to me, and I realized that by learning Spanish I would be able to speak to and learn from an even greater group of people, all over the world but also in my own community.”

In high school, Rossi dreamt of attending classes in a Spanish-speaking country as she was “infatuated” with living and communicating in a foreign language. “Instead, my family hosted Mariapaula, an exchange student from Mexico, who taught me Spanish phrases, Mexican culture, and her family’s values,” she said. “That ‘sip’ of an experience intensified my thirst for a more grand cultural exchange that I will now have by teaching English in a Uruguayan classroom and being immersed in the language and culture of that Spanish-speaking nation.”

After her Fulbright year, Rossi will seek New York State certification in Spanish adolescent education, allowing her to teach both ENL and Spanish. “When I discovered Spanish, I fell in love,” she said. “My eighth-grade teacher introduced me to the language, not only as an additional means to communicate with others, but also as a lifestyle, which intrigued me even more. I wanted the language to be part of my life, and I wanted to teach it, too.”

The Fulbright application review committee at Geneseo wrote of Rossi, “Janine has a big personality. Vibrant, cheerful, and thoughtful, her manner and sincere desire to be of service will attract students to her. She is exceptionally self-aware and seems to consider carefully the impact of all she says and does thoughtfully and with a kind of cultural sensitivity that will serve her well.”

The same committee described Kwandrans as “articulate with a remarkable ability to adapt to challenging situations, actively seeking out unfamiliar circumstances as learning experiences to grow.” The members noted her love of Spanish literature and film and desire to undertake a dialogue with Spanish students centered on storytelling to create greater understanding: “It is that kind of cultural sensitivity, humility, and awareness that convinced us that Kelsey understands well the responsibility she will be taking on.”

Last month, for the second time in the College’s history and in consecutive years, SUNY Geneseo was named a Top Producer of U.S. Student Fulbright awards, the State Department’s Bureau of Educational and Cultural Affairs announced in its annual article in The Chronicle of Higher Education. For the 2017–18 Fulbright cycle, Geneseo was the first dedicated SUNY institution ever to be named a Top Producer of U.S. Student awards in any category — bachelor’s, master’s, research, or special-focus four-year institutions.

The Fulbright Program is the highly competitive flagship international educational exchange program sponsored by the U.S. government to increase mutual understanding between the people of the United States and citizens of other countries. According to the U.S. State Department, “Fulbrighters” are considered cultural ambassadors who “interact with their hosts on a one-to-one basis in an atmosphere of openness, academic integrity, and intellectual freedom, thereby promoting mutual understanding.”

The U.S. Student Fulbright 2020–21 competition, which is open to students and recent alumni, is administered at Geneseo by the director of National Fellowships and Scholarships, Michael Mills, who can be reached at millsm@geneseo.edu and (585) 245-6002. For more information about the Fulbright and other nationally and internationally competitive scholarship and fellowship programs, visit Fellowships and Scholarships.