Leah Christman '19 to Serve as a Fulbright in India 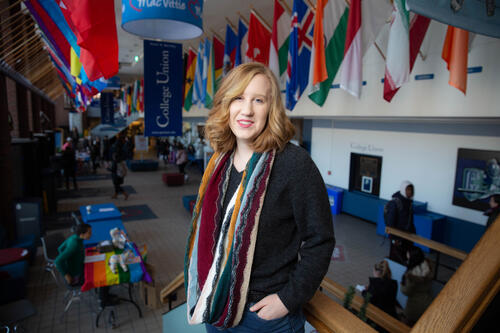 A lifelong cinephile, Leah Christman’s first introduction to India was in her 9th-grade history class through Richard Attenborough’s film Gandhi. “I was intrigued by the beautiful and innovative people and excited to learn about the country’s intricate culture,” she said. “Ground-breaking cinematic classics like Mother India and Mulk demonstrate the artistic genius of Bollywood filmmakers but also the cultural parallels detailed in Indian cinema with Western culture.”

Christman ‘19, an English literature and Honors Program major, knew little of southeastern Asian cultures as a child in small-town Wellsville, N.Y., but recognized and related to many of the cultural threads found in the classic Bollywood epics she watched growing up. But, as she notes, “Films are ultimately an illusion. I want desperately to experience India firsthand, traverse its streets, absorb its beauty, and listen attentively to what it has to tell me.”

Christman will have that chance to experience the reality of India as she has won a 2019–20 U.S. Student Fulbright award. She will serve as a Fulbright-Nehru English Teaching Assistant (ETA) in either a middle or secondary school in a community to be determined by the United States-India Educational Foundation. The Fulbright Program is the highly competitive flagship international educational exchange program sponsored by the U.S. government to increase mutual understanding between the people of the United States and citizens of other countries.

According to the U.S. State Department, India Fulbrighters are considered “cultural ambassadors of U.S. society, culture, and history and help to expand the world view of their students.” The Fulbright-Nehru ETA Program is designed for American citizens to become “a part of the community” to help it “grow with whatever skills and knowledge an ETA can impart all while learning about Indian culture and society.” Christman will undergo intensive language training in Hindi, Bangla, Tamil, and Odiya during the July orientation period in India.

For the 2019–20 application cycle, Geneseo set a record as 12 of the 19 applications the College submitted reached semifinalist status, far outpacing the previous record of eight. Christman’s award brings the College’s total award recipients to 27, with 15 of those awards coming in the past four years alone and 23 awards since 2010. Notification of awards for semifinalists will continue by country through April.

“As an ETA teaching in India, I will undoubtedly absorb more wisdom from the kids than I could hope to give back,” she said. “However, I will seek to instill in my students the constructive power of servant leadership.” That attitude of service has been a hallmark of Christman’s Geneseo experience as she has been a student ambassador, leadership mentor for Geneseo Opportunities for Leadership Development Center, Newman Civic Fellow, Andrew Goodman Vote Everywhere ambassador, committee member and volunteer for Respite Center for Alzheimer's Patient Care, Teresa House Hospice Care volunteer, and the Geneseo Memories Campaign treasurer.

Last month, for the second time in the College’s history and in consecutive years, SUNY Geneseo was named a Top Producer of U.S. Student Fulbright awards, the State Department’s Bureau of Educational and Cultural Affairs announced in its annual article in The Chronicle of Higher Education. For the 2017–18 Fulbright cycle, Geneseo was the first dedicated SUNY institution ever to be named a Top Producer of U.S. Student awards in any category — bachelor's, master’s, research, or special-focus four-year institutions.

Christman firmly believes that “writing evokes empathy between groups.” Remarkably during her service as a volunteer at the College’s writing learning center, the first student she tutored was a young man from India named Ruben Multani who first learned from an American Fulbright ETA in high school. “Ruben and I fostered a mutually beneficial relationship in which I helped him revise his work, while he told me about his life through writing,” she said. “That exchange gave us an avenue of understanding that I would never have anticipated.”

When Christman returns from India in 2020, she plans to pursue a doctoral degree in speech-language pathology. “I am very interested in interdisciplinary pursuits, and this particular field provides a perfect combination of sciences, language, and above all, helping people of many backgrounds and ages,” she said. “As an English major, this may seem like a strange choice, yet the English degree I've received has taught me how to communicate, empathize, and think critically with others, skills a career in speech pathology requires.”

The U.S. Student Fulbright 2020–21 competition, which is open to students and recent alumni, is administered at Geneseo by the director of National Fellowships and Scholarships, Michael Mills, who can be reached at millsm@geneseo.edu and (585) 245-6002. More information about the Fulbright and other nationally and internationally competitive scholarship and fellowship programs can be found on Geneseo’s Fellowship & Scholarship webpages.