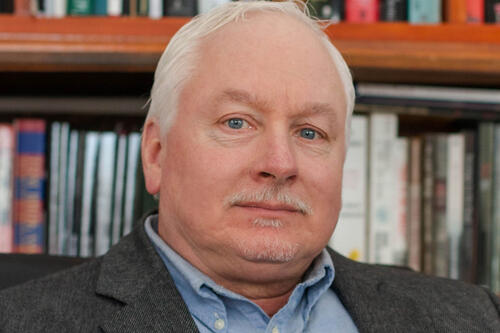 Educator and author Matthew Rozell ’83, ’88 MS, will deliver the annual Kenneth Roemer Lecture on World Affairs at SUNY Geneseo. His talk, “Liberation, 1945: An American GI Response to the Holocaust During WWII,” will take place at 2:30 p.m. on Wednesday, April 8, in the Doty Recital Hall. The event is free and open to the public.

On April 13, 1945, three weeks before the end of World War II in Europe, two tank commanders of the 743rd Tank Battalion of the U.S. Ninth Army overran a train transport near Magdeburg, Germany, filled with 2,500 Jewish concentration camp victims, many of them children. One of the tank commanders had a Kodak Brownie camera and recorded the rescue. The dozen snapshots taken that day were stored a shoebox in the back of a closet for over 60 years until brought to light by a high school oral history project interviewing WWII soldiers.

Rozell is an award-winning history teacher, author, speaker, and blogger on World War II and the Holocaust. He taught at Hudson Falls (NY) High School for thirty years. In 2009, he and his class helped to reunite more than 275 Holocaust survivors with their American soldier-liberators and were featured as an ABC World News Person of the Week. The work was later released as his 2016 book, A Train Near Magdeburg (Woodchuck Hollow Press, 2016), which is currently in production for a PBS documentary.

The Kenneth Roemer Lecture on World Affairs is a memorial to Roemer’s longstanding interest in global issues. Spencer J. Roemer, emeritus director of admissions at Geneseo and member of the Geneseo Foundation Board of Directors, endowed the series in his brother’s name.