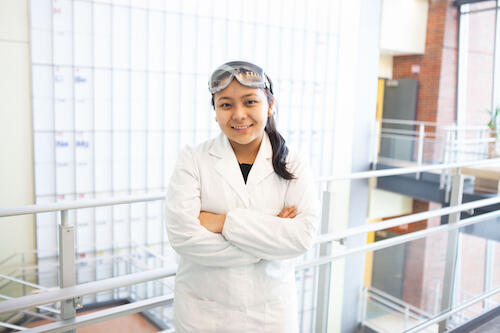 As the Eddie Lee ’76 First Generation Ambassador, Sherpa spent the fall semester in her native Nepal, shadowing pediatric doctors to learn about medicine and the challenges of providing health care in underserved areas.

She was inspired to help while there. She collaborated with the doctors to provide no-cost eye exams to more than 700 children and prescription eyeglasses to 80 students who needed them. Sherpa organized every aspect of the project, from hiring health care professionals and transportation to obtaining the eyewear. Several of the Nepalese students had said they couldn’t participate in their education because they couldn’t see.

“I never thought I could change the lives of so many kids, but I did it,” says Sherpa. “And it is amazing what you can do with less than $1,000. It has given me motivation and confidence to embark on more, bigger things in the future. One person can make such a big difference.”

Sherpa says her motivation to challenge herself and believe her ideas will succeed comes from her parents, who immigrated to the United States to create better opportunities for their daughter. Sherpa was 9 months old when they left and needed to stay in Nepal. Her parents paid for her to attend boarding school from age 4 to 14, when she joined them in Carmel, N.Y. By then her father owned an import business; her mother worked in daycare.

“I respect them so much for what they did to provide opportunity,” says Sherpa. “I think of my parents in all of my decisions. If they could do it, and make such sacrifices, I can.”

A neuroscience major, Sherpa has excelled in her studies, participated in activities and received several accolades for her efforts. She has volunteered at the Geneseo hospice Teresa House and serves as a peer mentor for Access Opportunity Program students.

In addition to the ambassadorship, Sherpa is a Jewish Foundation for Education of Women scholar for the federation’s international relations and global affairs program, and was invited to join the Phi Beta Kappa honor society.

Sherpa completed an internship at the Earth Institute at Columbia University, assisting the National Center for Disaster Preparedness in studying the mental health of people affected by the 2007 Deepwater Horizon BP oil spill.

For two years, she has assisted Barnabas Ginkoyo, director of introductory chemistry labs and lecturer at Geneseo, in his study of bone fracture repair. Ginkoyo earned his undergraduate degree in Kenya. Like her, Sherpa says, he came to the United States not knowing what the future held; he is a mentor and role model.

“He’s such a huge motivation and inspiration for me,” says Sherpa. “He’s supportive and has been through some of the same experiences as me and has built this amazing career for himself, teaching and researching.”

Sherpa wants to pursue a career in medicine, perhaps pediatrics.

“There is so much out there to learn,” she says. She’s unsure just what direction she will take. “I learn the most when I put myself out there.”