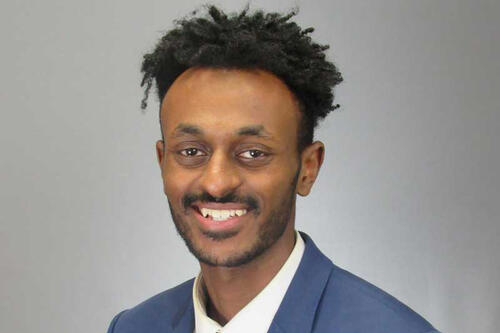 The Critical Language Scholarship (CLS) Program is a fully funded summer overseas language and cultural immersion program in the U.S. State Department for American undergraduate and graduate students. The State Department encourages undergraduates to study languages deemed to be vitally important to national security and competitiveness, and the department established the program to address that need. The awards are offered for 15 languages deemed critical by the U.S. government.

Cynthia Klima, associate professor of German and Geneseo’s coordinator of less commonly taught languages, notes, “Abdul is a very serious student of Russian who began his course of study with Natalia Arapov-Makarenko, and then undertook a directed study with me in Intermediate Russian 202. Given his devotion to international relations and intense interest in the language, I do not think CLS could have selected a more qualified or better-prepared candidate.”

Sanderson was born in Ethiopia and, after losing his parents, was adopted at age seven by a single mother from Carthage, NY. Because of his immigrant experience, he has made a lifelong commitment to “spreading cultural understanding and embracing differences, a commitment I see in the CLS program’s mission, vision, and values.”

A summer job in Yellowstone National Park with students from around the world, including Bulgaria, Russia, and Serbia, gave Sanderson new insights into living cross-culturally. “Every interaction was an opportunity to learn about their culture and language,” he says. “Greetings I learned were foundational in easing communications. I participated in dance lessons with Colombians and cooked with Bulgarians and Serbians. Those friendships persist to this day because of cultural exchange and understanding.”

Sanderson looks forward to meeting and communicating directly with the people of Russian-speaking countries like Belarus, Ukraine, and Kazakhstan. “What interests me most about the region is the people, the rich history of the area with its numerous cultural differences that have culminated into one shared trait, a common language.”

After his CLS experience, Sanderson plans to continue his Russian studies through work with the Department of State as a foreign service officer and through graduate study in either economics or international affairs, concentrating on Eastern Europe.