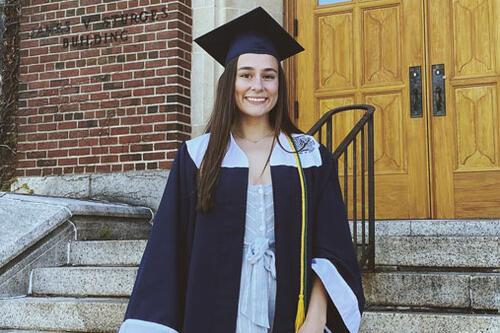 Alberta Eshenour ’20 from Waterloo, NY, has received the Congress-Bundestag Youth Exchange for Young Professionals (CBYX) Fellowship, funded by the German Bundestag and US Congress. Eshenour is an international relations major with a concentration in global political economy and minors in German and public administration.

Eshenour is the fifth Geneseo alumni to win the highly competitive fellowship, joining Ben Conard ’16, Jamie Butcher ’13, Michelle Frenssen ’12, and Darcy Kuhlmann ’97. The award annually provides 75 American and 75 German young professionals the opportunity to spend one year in Germany and the US respectively. Eshenour will take two months of intensive German language training and one semester of classes at a German university or a three-month internship in her field, all while living with hosts in a cultural immersion program.

Eshenour grew up as the youngest of eight children in a family that traces its lineage on both sides to Germany. In high school, she spent a year in Leipzig, Germany, as a Rotary Exchange student, then began taking German during her freshman year at Geneseo in preparation for a Berlin study abroad in Spring 2019. She has reached near fluency with the language.

“As a student of international relations, I am drawn to Germany’s unique history and leadership role in the European Union today, especially during the political and economic upheavals involving Brexit,” she said. “I want to learn more about the rise of alternative political groups across Europe and economic development in the former German Democratic Republic since the fall of the Soviet Union. My international relations studies taught me that policymakers in the United States can learn a great deal from the Germans.”

At Geneseo, Eshenour played two years on the NCAA varsity lacrosse team, served as a government affairs intern with the Partnership for Public Service in Washington, and worked as a congressional intern in the office of US Senator Chuck Schumer. In 2018, she participated in New York Governor Andrew Cuomo’s SUNY Stands with Puerto Rico Program, volunteering in disaster relief efforts following Hurricane Maria.

“Alberta’s diligence and interest in her German minor coursework paved the way for this scholarship,” said Cyndy Klima, associate professor of German. “She applied herself to learning German and creating an impressive resume. Mobilizing early for a competitive scholarship is key, and Alberta’s work has been outstanding all four years she has been at Geneseo.”

The CBYX fellowship competition was created as a public diplomacy program to promote understanding between the people of the United States and Germany. It’s open to students and alumni who are US citizens and under 25 years of age. It is administered at Geneseo by Director of National Fellowships and Scholarships Michael Mills, who can be reached at millsm@geneseo.edu and 585-245-6002. For more information about Congress-Bundestag and other nationally and internationally competitive scholarship and fellowship programs, visit Fellowships and Scholarships.