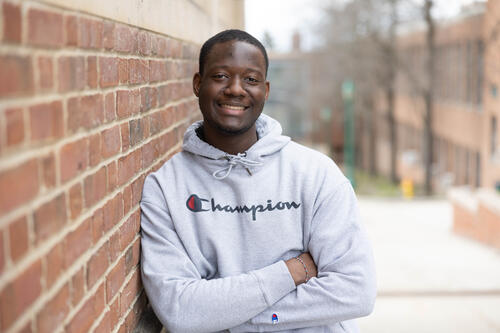 Syndou Cisse ’22 is one of 45 students in SUNY’s Educational Opportunity Program (EOP) to receive the 2022 Norman R. McConney Jr. Award for Student Excellence. The award recognizes outstanding EOP students for their academic achievements and overcoming personal obstacles throughout their lives

Syndou Cisse ’22, a biology major, moved from Ivory Coast to the Bronx when he was 16. He knew he wanted to attend college, and felt Geneseo was the right fit after he stayed overnight with another student, during an Access Opportunity Program (AOP) event for prospective students who live in New York City.

Cisse is the first person in his family to attend college. He says the support he received from fellow students in the AOP and EOP programs and professors helped him excel.

“You don’t really know about college until you get here,” says Cisse. “I attended the summer AOP orientation and I felt supported. I want to pay it back for the support I have had.”

Cisse does that by tutoring AOP students throughout the year. He is a member of the national biology honor society, a Ronald E. McNair Scholar, and a resident assistant. Additionally, he conducts research in the biology department and has served as a peer mentor for AOP students.

Cisse was recognized at an event in Albany, N.Y. on April 14. The award is named in memory of Norman R. McConney, Jr. (1946–2016), a graduate of the University at Albany and former assistant dean for special programs at SUNY.

“Syndou embodies what it means to be an Educational Opportunity Program student,” says EOP counselor Bryan Rivera. “As a leader on campus, Syndou has been influential in mentoring students while fulfilling the roles of resident assistant, researcher, and tutor. Through service, hard work and dedication, Syndou has excelled both in and out of the classroom. His perseverance and determination are exemplary and will serve him well in his future."

Since its inception in 1967, the EOP has provided access, academic support, and supplemental financial assistance to students from disadvantaged backgrounds, many of whom are the first in their families to attend college. In its 55-year history, the EOP has served more than 78,000 students and evolved into one of the country's most successful college access programs.

The EOP at Geneseo is funded to support 103 students each year.