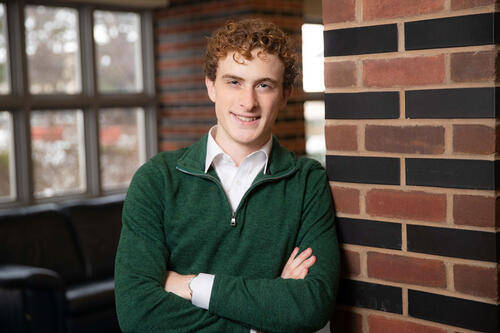 Michael Suchyna ’21, a business administration major from Williamsville, NY, has won a Benjamin A. Gilman International Scholarship to spend Spring 2020 studying at the KEDGE Business School in Marseilles, France. The State Department award assists U.S. undergraduates of limited financial means to pursue academic studies or internships abroad to prepare them for an increasingly global economy and interdependent world. Since 2016, 16 Gilman awards have been earned by Geneseo students.

KEDGE is the largest business school in France and annually ranked as one of the best business schools in Europe. Suchyna will take coursework in Intercultural Management, Economic Sustainability, Entrepreneurship, and Organizational Behavior.

“KEDGE invites students from almost every kind of ethnic background and cities all around the world and on every continent,” Suchyna said. “The ability to hear perspectives from other cultures and backgrounds will broaden my knowledge in fields specific to my major. Many of the courses I take now discuss international matters that I have trouble relating to because they are not impacting me personally. Studying abroad will help achieve my academic goals by enhancing my understanding of international affairs.”

Suchyna speaks French at the intermediate level and chose Marseilles as a base for his study abroad so that he might explore his interest in French culture. “I hope to better understand what it means to be a French citizen by partaking in cultural festivities and traveling to places of cultural significance such as the cities Paris, Nice, Versailles, and Montpellier.”

Suchyna takes seriously the responsibility he feels as an ambassador representing the United States and plans to join Rempart, a French organization devoted to preserving the country’s historic roots and heritage. “Our past guides the future, so as an American representative, I plan to promote and maintain the recognition of French heritage,” he said. “Ultimately, my plan is to help local communities preserve their identities as French citizens while I gain the satisfaction of better understanding French heritage.”

After graduation, Suchyna hopes to become a financial representative for IDEX, an international Health and Science Technology Corporation. While in France, he plans to meet with representatives from IDEX’s European branch office to discuss his interest in the company and further his international network. “What I hope to gain from this experience abroad is proof that I am ready to live somewhere beyond New York and administer business internationally.”

The Gilman program debuted in 2001, and since that time has provided funding for U.S. students to study in 151 countries from more than 1,335 institutions. According to statistics from 2017–18, only eight percent of Gilman Scholars had studied abroad before receiving the scholarship, and 47 percent were first-generation college students. Sixty-four percent of Gilman Scholars either took language courses or courses taught in another language during their study abroad semesters.

For more information about the Gilman Scholarship and other fellowship or scholarship programs, contact Michael Mills, director of national fellowships and scholarships, at millsm@geneseo.edu or 585-245-6002.