GAGG, in a word, is about one thing: FUN.

The club exists solely for that reason. We are probably one of the easiest clubs to belong to -- you don't have to do anything to be a member except enjoy hanging out and playing games. You decide your own level of involvement. Don't be afraid to try a new game if you've never played -- we're all eager to teach new friends our favorite games.

Minister of Board Gaming

What kind of games do we play, you ask? Well, what kind DON'T we play?

We play everything from the classics like Risk or Monopoly to more obscure but excellent board games like Chutes and Ladders, Lord of the Rings, Ricochet Robot and many, many more! Have a favorite board game that no one else plays? Bring it to the meetings and you'll almost definitely find people to play with!

Computer games, the Nintendo Switch, PS4, Xbox 1. We love video games! We're always up for some console gaming, everything from Super Smash Bros., to Halo, to Rock Band, to Little Big Planet. Yes, that does include League of Legends and a variety of Steam games! Want to test your skills against some of the best, or just want to try a cool looking new game? Bring it on! 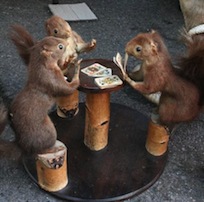 We have events throughout the year, from drafts of Magic: The Gathering, to board-game nights to our Mini-Con (where we take over the entire upstairs of the Union and play games of every description and length).

Sure, you've heard of Dungeons and Dragons. Ever wondered what its all about? It's sort of like a combinatation of Whose Line is it Anyway?, your favorite action/adventure/horror film, and a bagful of dice. Did you like The Lord of the Rings films? Ever wanted to fill the boots of Aragorn or Legolas facing Orc hordes? The Lord of the Rings RPG is your chance. Ever wanted to be a Jedi from Star Wars or a James Bond-esque superspy? Whatever kind of action you're into, there's almost definitely an RPG for it. Never played before? Don't worry, it's easier than you think! If you're interested in any kind of interactive storytelling, you should definitely give an RPG a shot -- they're a lot of fun and a great way to make friends. Also, if you're interested, you can get involved with one our DM training groups to learn how to run D&D.

Warlord, Warhammer, 40k, HeroClix, Inquisitor -- yeah, we do that. Recruit new players to the fold or come to our annual convention, Running GAGG and play with the veterans!

GAGG's been known to organize group trips to popular movies like the Matrix, Lord of the Rings and Star Wars. On top of that, we've quite a few movie buffs in our ranks, so if you like discussing films, trivia and pop culture new and old, we're happy to accommodate. 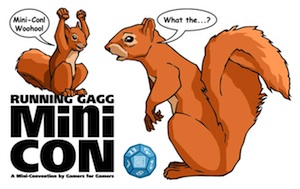 We have events throughout the year, from drafts of Magic: The Gathering, to board-game nights to our Mini-Con (where we take over the entire upstairs of the Union and play games of every description and length).

GAGG runs an annual convention at the beginning of each year called Running GAGG. Running GAGG has been running for over 20 years and is one of the most respected conventions in the area. Our little group regularly draws nearly 300 people from all across the state for a whole weekend of games and fun. We take over the entire College Union for the weekend and play games of every description.

Bottom line -- if it's a game, we'll play it. Any game you can possibly think of, bring it, teach some people and have a blast.

It's all about fun.