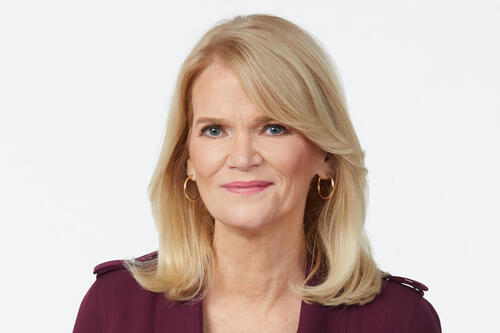 Award-winning journalist Martha Raddatz, ABC News chief global affairs correspondent and co-anchor of ABC’s This Week with George Stephanopoulos, will deliver the James Jeremiah Wadsworth Endowed Lecture at 7 p.m., Wednesday, September 18 at the Wadsworth Auditorium on the SUNY Geneseo campus. Raddatz’s talk, “From the White House to the Middle East,” will be followed by a Q&A. The event is free and open to the public.

Martha Raddatz has covered national security, foreign policy, and politics for decades—reporting from the Pentagon, the State Department, the White House, and conflict zones around the world.

Raddatz has received the First Amendment Award from the Radio Television Digital News Foundation (RTDNF) for excellence in journalism as well as the prestigious Fred Friendly First Amendment Award. She’s earned four Emmy Awards, including awards for covering the inauguration of Barack Obama, September 11, and the killing of Osama Bin Laden. She also received the 2007 International Urbino Press Award, the 2005 Daniel Pearl Award from the Chicago Journalists Association, and a 1996 Overseas Press Club Award for her live coverage of the assassination of Yitzhak Rabin. In 2007, the White House Correspondents’ Association awarded her the Merriman Smith Memorial Award for excellence in presidential news coverage under deadline pressure. Raddatz is the author of the bestseller The Long Road Home—a Story of War and Family.

The James Jeremiah Wadsworth Lecture was established through an endowment gift from Alice Wadsworth Strong and her husband Trowbridge Strong. The public lecture series is named in honor of Alice Strong’s father, former United Nations Ambassador James J. Wadsworth, as a memorial to his life of public service and quest for world peace.