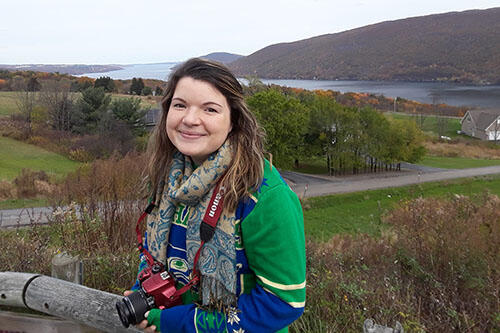 Griffith was a double major at Geneseo in English (Creative Writing concentration) and Communication (Intercultural and Critical Studies concentration) and will be placed by the Fulbright Commission at either a Dutch-speaking or French-speaking university or college starting mid-September through mid-June of 2019.

Since 1985, Geneseo has now had 21 Fulbright award winners with 17 awards coming since 2010. For the 2018-2019 applicant period, Geneseo had a record 19 applications, with eight of the applicants becoming semi-finalists, also the highest number in the College’s history. Griffith is the first of those semi-finalists to hear a result as notification will continue through this month.

Earlier in the year and for the first time in the College’s history, SUNY Geneseo was named a Top Producer of U.S. Student Fulbright awards for 2017-18, a recognition the State Department’s Bureau of Educational and Cultural Affairs announced in its annual article in The Chronicle of Higher Education. Six Geneseo alumni won U.S. Student Fulbright awards for 2017-2018, placing the College third among all 742 Carnegie classification master’s degree institutions. Geneseo was the only dedicated SUNY institution to be named a Top Producer of U.S. Student Awards in any category-- bachelors, master’s, research, or special-focus 4-year.

To prepare for her placement, Griffith enrolled in two certificate courses in the Dutch language through distance-learning with University College London and is currently working toward earning a third certificate in Intermediate Dutch I. She has already reached the intermediate level in Spanish and speaks some French, and her love of language was an important motivator for her seeking a Fulbright.

“There is a strong desire in me to teach in Belgium where Dutch, French, and German are held as official national languages,” said Griffith. “I hope to gain in-depth experience with Belgium’s multicultural population while sharing my experiences with diversity from an American perspective.”

As an undergraduate, Griffith undertook a study abroad semester at the University of Groningen during the spring of 2015 and has travelled extensively in Europe.

Irene Belyakov-Goodman, a member of the English Department faculty and ESOL Program Coordinator at Geneseo (English for Speakers of Other Languages), said Leandra “has outstanding communication skills and is a brilliant writer.” She also praised her ability to communicate in a clear, professional manner as an ESL teacher with a “rich vocabulary, excellent command of English grammar and writing style, and an ability to organize a lively discussion with other group participants.”

“My students from Japan, China, Korea, and South America told me how much they appreciated her work, manner and genuine interest in their cultures,” said Belyakov-Goodman. “She has a proven record of representing the U.S. abroad with distinction.”

Griffith’s passion for teaching English and participating in cultural exchange was made evident during her 2016 service with City Year AmeriCorps. She especially remembers working one-on-one with a third grade immigrant child named Mauricio from Mexico who knew little English. Griffith’s job was not only to teach multiplication and literacy, but also to help children like Maurico relate to their peers.

“What I learned most was that my six years of studying Spanish were helpful but not as important as empathy and Mauricio’s own desire to share and learn,” said Griffith. “As an ETA in Belgium, I will incorporate the lessons I learned with Mauricio in my teaching about the English language and American culture, while proactively learning about Belgian culture in return.”

Atsushi Tajima, associate professor of communication at Geneseo, considers Griffith to be a sociolinguist who “has been seriously studying social, cultural, and political functions of languages. As a result, for example, she has consistently shown her in-depth understanding about the unique, powerful position that the English language has—something that could oppress ESL learners’ minds—in today’s global communication. I foresee that she won’t merely be an ‘English-above-all’ kind of instructor. Rather, she will be a very considerate instructor who understands the complex psychology of ESL learners.”

One of the goals for the U.S. Student Fulbright Program is intercultural exchange and awareness through immersion in a community. Griffith says her primary goal as an ETA is to support the linguistic and intercultural skills of university-level Belgian counterparts but also learn more about the country, its people, and its languages.

“This Fulbright Fellowship will position me to promote U.S.-Belgian relations through bringing the Belgian culture and spirit of multilingualism to Americans who know little or nothing about Belgium,” she said.

To that end, she will undertake a supplemental project modeled after the famous radio program StoryCorps, which promotes digital recording of wisdom, pop culture, and personal stories. Griffith hopes to create a community project in which Belgian students interview family and community members and record their life stories, as a way to “promote Belgian pride and preserve the histories and language of Belgian people.”

During her senior year at Geneseo, Griffith’s Intercultural Communication class collaborated with Russian counterparts in Moscow to record, translate, and compare the life stories of those 65 and older in our communities. Griffith believes that experience helped her gain “a new perspective into Russian culture, language and history.

“I learned a great deal from Russian viewpoints on American culture. This proposed community project will undoubtedly teach me a great deal about Belgian society and allow the students to examine more closely their culture,” she said.

The Fulbright Program is the flagship international educational exchange program sponsored by the U.S. government and aims to increase mutual understanding between the people of the United States and the people of other countries. Fulbright alumni have become heads of state, judges, ambassadors, cabinet ministers, CEOs, and university presidents, as well as leading journalists, artists, scientists, and teachers. They include 59 Nobel Laureates, 82 Pulitzer Prize winners, 71 MacArthur Fellows, 16 Presidential Medal of Freedom recipients, and thousands of leaders across the private, public and non-profit sectors. Since its inception in 1946, more than 380,000 “Fulbrighters” have participated in the Program.

After her ETA year, Griffith is planning to seek a career as a cultural ambassador to promote language acquisition and intercultural competence. To that end, she is interested in taking university courses in Dutch, French, and/or Belgian culture, and after her placement, applying to Vrije Universiteit Brussel in Brussels, Belgium for the University’s Multilingual Master’s Program in Linguistics and Literacy.

The U.S. Student Fulbright 2019-2020 competition, which is open to students and recent alumni, is administered at Geneseo by the Director of National Fellowships and Scholarships, Michael Mills, who can be reached at millsm@geneseo.edu and 585-245-6002. More information about the Fulbright and other nationally and internationally competitive scholarship and fellowship programs can be found at www.geneseo.edu/fellowships_and_scholarships.