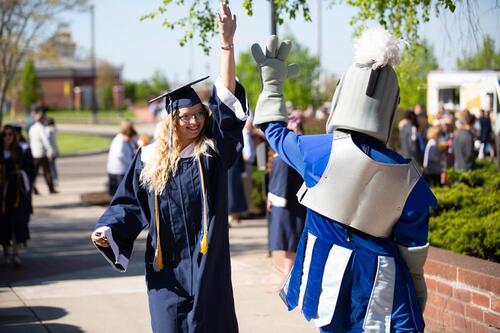 On May 18, SUNY Geneseo held its 153rd annual commencement ceremonies. More than 1,200 undergraduates received their degrees, along with honorary doctorates awarded to Mark Ashley '77 and Joseph Carr.

Jeri Muoio ‘69, Ph.D., urged graduates to discover their purpose as the commencement keynote speaker. “The best advice I can give you is that those people, those companies, those cities, those organizations that are clear about their purpose, clear about why they are the most successful,” said Muoio, who is the former mayor of West Palm Beach, FL.

Passion, she said, is Individualistic. “It is an internal feeling — it is the feeling of excitement you have about your work, whereas purpose is outward facing. Purpose is defined as the sense that you are contributing to others, that your work has broader meaning. Passion, the often drives purpose.”

Muoio gave her address before an estimated 1,238 graduates split between two ceremonies that were celebrated by audiences of family, friends, faculty, and staff.

During the morning ceremony, the College conferred an honorary Doctor of Science degree upon Mark Ashley ‘77, who has made significant contributions in the area of traumatic brain injuries.

The senior orators this year were Angela Joan Kubik, a biology major from Hamden, NY, and Sabrina Bramwell, an English major from Bronx, NY.

The 2019 commencement speakers’ talks can be found on the commencement web page. Excerpts from President Denise Battles’ remarks are available on the president’s web page.

Receiving the Richard Roark Award was Leah Christman ‘19, an English literature and Honors Program major, human development minor, and member of the Edgar Scholars College Honors Program from Wellsville, NY. The award is presented to a graduating senior whose excellence in scholarship and community service emulates that of Roark, a former Geneseo professor of anthropology who was presumed drowned off the island of Guadeloupe in the French West Indies.

Sara Reppenhagen, a communication major from Tully, NY, received the President’s Cup, given annually to a graduating senior who exemplifies superior service and dedication to the Geneseo Student Association.

Watch both of Geneseo’s 2019 Commencements.