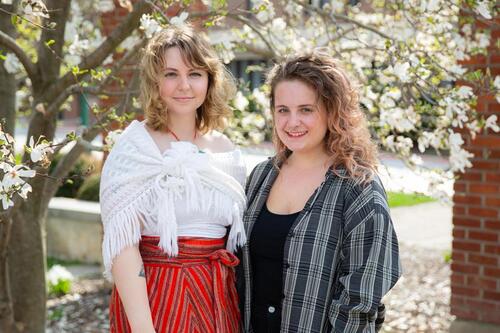 History majors Isabel Owen ’19, from Great Neck, NY, and Catherine Shields ’19, from Hilton, NY, have won 2019–20 U.S. Student Fulbright awards for Brazil and Turkey, respectively. They will serve as English Teaching Assistants in a university or post-secondary institution for a year, expanding their abilities with the Portuguese and Turkish languages and serving as cultural ambassadors in a local community.

The grants cap off a record-breaking year for Geneseo Fulbrights with seven awards and 12 semifinalists. The five other winners for 2019–20 were Lorenzo Rodriguez ’19 (Bulgaria), Janine Rossi ’18 (Uruguay), Kelsey Kwandrans ’19 (Spain), Leah Christman ’19 (India), and Annie Renaud ’19 (Russia). Rachel Britton ’18 was named an alternate for Iceland.

Besides both majoring in history, Shields and Owen are double majors in communication and English, respectively. Both have won U.S. State Department awards, with Owen earning a Benjamin A. Gilman International Scholarship in 2018 for a study abroad in Brazil, and Shields winning a Critical Language Scholarship for Turkish earlier this year. Both have also worked as English tutors with local migrant populations, Owen with the Geneseo Student Coalition for Migrant Workers and Shields with St. Mary’s Refugee Outreach Center in Rochester, NY.

Owen said the lessons she learned majoring in history encouraged her sense of global citizenship. A freshman year Latin American Visual Cultures course sparked her interest in both Latin American studies and the history major, “allowing me to embrace interdisciplinarity with my other majors and with other languages, which eventually informed my current history thesis project on United States immigration control at the turn of the twentieth century.”

Shields said her coursework as a history major “drew me into the narratives of different peoples, the complex difficulties of their stories, and the themes that connect us across time and space. A sophomore year course called Islamic World: 600-1800 taught me about the values, ritual practices, doctrines, and institutions that represented the main manifestations of mystical practice in Islam. This sparked my interest in the Near East and ultimately led to my thesis project on feminine power and agency in Sufism.”

In 2018, Shields and Owen participated in the Voices in the War on Terror project, interviewing dozens of Geneseo community members in regard to their memories and oral histories associated with 9/11 and the War on Terror. That project culminated in an exhibition of their findings through art, poetry, and mixed media.

“We also took a history class last fall semester titled Women in the Medieval World,” said Owen. “Our final projects focused on the voices of traditionally marginalized women in pre-modern history. Cate’s project involved female Sufi mystics in the medieval world, and mine explored inter-religious relations in Iberia, with a focus on Jewish and Muslim women’s voices.”

“Isabel and Cate are exemplary students who not only earn high marks in their courses but strive to learn about other people’s pasts in ways that are empathetic and authentic,” said history department chair and associate professor Justin Behrend. “Through their research and extra-curricular activities, they have both shown an admirable commitment to intellectual inquiry and social justice.”

The Fulbright U.S. Student Program provides grants for individually designed study/research projects or for English Teaching Assistant Programs. During their grants, “Fulbrighters” meet, work, live with, and learn from the people of the host country, sharing daily experiences. The program facilitates cultural exchange through direct interaction on an individual basis in the classroom, field, home, and in routine tasks, allowing the grantee to gain an appreciation of others’ viewpoints and beliefs, the way they do things, and the way they think.

The 2020–21 U.S. Student Fulbright competition, which is open to students and recent alumni, is administered at Geneseo by director of National Fellowships and Scholarships Michael Mills, who can be reached at millsm@geneseo.edu and (585) 245-6002. For more information about the Fulbright and other nationally and internationally competitive scholarship and fellowship programs, visit Fellowships and Scholarships.