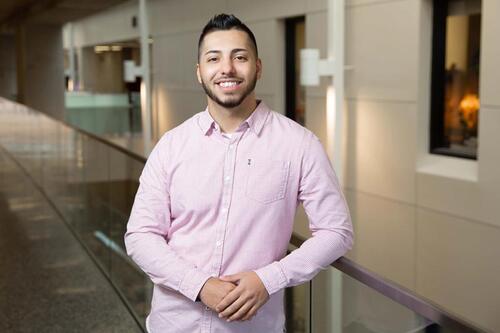 Lorenzo Rodriguez ’19, from Jamestown, NY, has won a U.S. Student Fulbright Research Grant for Bulgaria for 2019–20. An anthropology major with a minor in sociomedical science, he will research the ways in which funding and staffing challenges within health care facilities impact local communities in the capital Sofia and neighboring cities.

Rodriguez has been navigating health care systems since he experienced his first asthma attack at age six. Hospital nursing staff treated him but also explained the medical realities and costs his family would face without health insurance. As time passed, the sociological stigmas and stereotypes associated with government health programs made him initially ashamed of his condition and the need for assistance.

A 2017 medical service trip to the Dominican Republic immersed Rodriguez in the rural villages of La Rosa and Villa Altagracia and illuminated the need for comprehensive community-based health care worldwide. In spring 2018, he assisted with an ethnographic study titled “Im/migrant Latino Farmworker and Farmworker Family Health and Access to Health Care,” led by assistant professors of anthropology Melanie Medeiros and Jennifer Guzmán. “That study familiarized me with the challenges faced by Latino farmworkers while trying to access health care resources for themselves and their families in New York State,” he said.

In July 2018, Rodriguez received a Student Ambassadorship from Geneseo’s Center for Integrative Learning. The $3,500 award supports student-designed projects that combine independent learning, innovative approaches to problem-solving, and community-based action. He traveled to Bulgaria and carried out a five-week pilot study titled “Health Care in Bulgaria.” Working with Bob Faber, founder and managing director of the nonprofit organization Welcome to Bulgaria, he conducted research, taught English for The Pink Foundation children’s charity, and “gained a love and basic understanding for the Bulgarian language by building many trusting relationships throughout the community.”

During his 2018 Ambassadorship, Rodriguez experienced the intense challenges facing the Bulgarian people in accessing health care. “I witnessed a web of complex anecdotal accounts from Bulgarians who have suffered, or who have loved ones suffering while navigating the health care system,” he said. “Taboos, misconceptions, and stories of malpractice that would not be considered common in New York State affect them, as does the extreme mental, emotional, and financial stress that permeates the daily lives and discourse of members of these communities.”

Rodriguez notes that most Bulgarians try to lead healthy lives despite inevitable illnesses, accidents, aging, and childbirth. “I have recorded stories of a devastated mother who felt forced to give birth under most unfavorable conditions, the fatherless son and mother who lost a court case for a hospital’s negligent care and avoidable death of his father, and the 26-year-old school teacher who explained that securing treatment for even the most uncomplicated illnesses is a matter of chance,” he said. “Their experiences compel me to continue conducting this research.”

Rodriguez is a McNair Scholar, has volunteered as a Geneseo fire department EMT/firefighter, and serves as president of both the Wrestling Club and the Wesley Fellowship Christian Group. He has also appeared in multiple Geneseo theatre productions, been a Resident Assistant with Campus Student Life, and performed with the Department of Music’s Percussion Ensemble.

Upon returning to the U.S., Rodriguez plans to advocate for an academic relationship between SUNY Geneseo and Welcome to Bulgaria so that “future anthropology students will have an opportunity for global civic engagement and can contribute to a grassroots approach at change.” He will write a detailed report and present his research at the American Anthropological Association Annual Meeting (AAA) to help inform community partners and health care providers in Bulgaria.

Rodriguez plans to have his work serve as a foundation for future publications and eventual applications to graduate schools. “I hope that through this research, I can help spread global awareness and initiate worldwide action, as well as to build a mutually beneficial relationship between Bulgaria, Fulbright, and Geneseo,” he said.

The Fulbright Program is the highly competitive flagship international educational exchange program sponsored by the U.S. government to increase mutual understanding between the people of the United States and citizens of other countries. “Fulbrighters” are considered cultural ambassadors who “interact with their hosts on a one-to-one basis in an atmosphere of openness, academic integrity, and intellectual freedom, thereby promoting mutual understanding.”

The U.S. Student Fulbright 2020–21 competition, which is open to students and recent alumni, is administered at Geneseo by director of National Fellowships and Scholarships Michael Mills, who can be reached at millsm@geneseo.edu and (585) 245-6002. For more information about the Fulbright and other nationally and internationally competitive scholarship and fellowship programs, visit Fellowships and Scholarships.