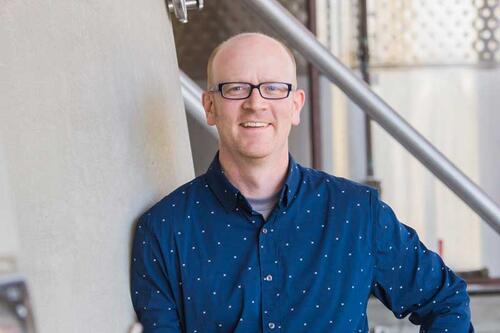 “Wineries hire chemists,” a California friend of Andy Robinson ’99 told him in 2001. “Why don’t you come out here to work a grape harvest?” Robinson, a graduate of SUNY Geneseo and Columbia University’s 3+2 program in chemical engineering, was between jobs and applying to grad schools—unsure what he wanted to do with his degree but sure he didn’t want to work for the oil or pharmaceutical industries. Why not try a winery, he thought.

Twenty years later, Robinson serves as winemaker for the Seghesio Family Vineyards in Sonoma County, California, crafting Zinfandels and Italian heritage blends with production methods that take him from vineyard to wine lab, from cellar to table.

After interning for that first California grape harvest, Robinson began his career as a lab technician and oenologist, or wine chemist, for Charles Krug Winery in Napa Valley. The winemaking process, from grapes on the vine to wine in the bottle, is regulated by the federal Tax and Trade Bureau, which requires analysis by a certified lab to ship wine to other states or countries.

Chemical analysis of individual grape clusters plucked throughout the vineyard helps determine when grapes should be harvested, says Robinson, “and there’s a ton of testing during the first couple months after they’re picked.” As an oenologist, he was responsible for both generating that analysis and maintaining a database to prove to the government—like a chain of custody—that pinot noir grapes were picked, then fermented, then made into a wine that went into a bottle labeled “pinot noir.”

Since joining Seghesio in 2003, Robinson has been tasting with the winemaking team, and his background as a lab technician helped him understand the connection between database numbers and flavors in wine.

“Over time, you connect the agriculture to the analysis and then connect those numbers to how a wine actually tastes,” he says. “After a while, you can skip the numbers and go straight from the vineyard to the flavors and use the numbers only as a guideline. You form a connection between your brain and your mouth.”

Seghesio fosters what it calls a terroir-driven approach to wine, which focuses on the complete natural environment in which a wine is produced, from soil to topography to climate. As winemaker, it’s Robinson’s job to connect the flavor of a wine back to the ground in which the grapes were grown, “to understand why a wine tastes the way it does, and then go backward and make a wine taste better based on how or where we grew it,” he says.

After decades in the field, Robinson insists his career is stronger for being based on a foundation of chemistry. “You learn the basics better, and I have always found that once you have the basics, the rest is more on-the-job training,” he says. “The best part is drawing that tight connection between the vineyards and the wine. The more time I get to do that, the happier I am.”