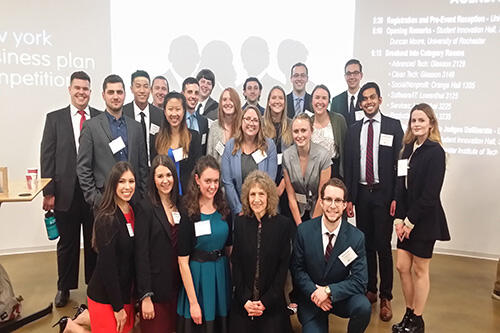 All are now finalists following the recent semi-final round competition at RIT. Voludus (haptic feedback game controller) advanced in the Advanced Tech track; Budamundi Lifestyle (ancient grain protein bars) in the Product track; Sondi (converting large data into musical scores) in the Services track; StandUp Leadership (leadership conference as a college recruiting tool) in the Social Entrepreneurship track. VerdimiNe (green synthesis of green chemicals) was originally an alternate in the Clean Tech track but has now moved forward as a finalist.

The Business Plan Competition organizers decided to eliminate the Biotech track, so the VentureWorks team Prolivio (migraine smart pack) was not able to enter the competition as planned, but the team presented at High Tech Rochester and may explore continued support through that opportunity.

Before going to the State finals in Albany, the students will deliver their final presentations for the semester on campus and they are open to the public. StandUp Leadership, Prolivio and Sondi will present April 20 from 11:30-12:45 in the MacVittie Union Hunt Room. Voludus, Budamundi, and Verdimine will present during GREAT Day April 25 from 3:50 – 5:05 p.m. in the Tower Room in Doty Hall.

The NYBPC is a venture creation and innovation competition to encourage innovation and entrepreneurship throughout New York’s colleges and universities.