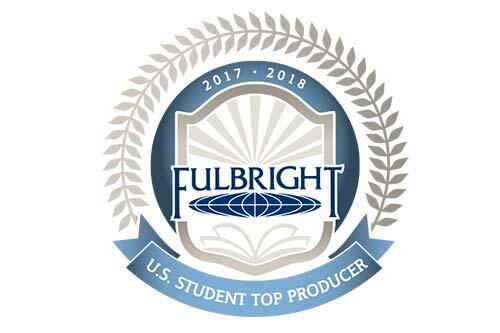 Geneseo has been named a Top Producer of U.S. Student Fulbright awards for 2017-18, placing third among all 742 Carnegie Classification master's degree institutions.

For the first time in the College’s history, SUNY Geneseo has been named a Top Producer of U.S. Student Fulbright awards for 2017­–18, the State Department’s Bureau of Educational and Cultural Affairs has announced in its annual article in The Chronicle of Higher Education. Geneseo is also the first dedicated SUNY institution to ever be named a Top Producer of U.S Student awards in any category — bachelors, master’s, research, or special-focus four-year institutions.

“This recognition is a tangible indicator of Geneseo’s commitment to inspiring globally aware citizens, as reflected in our College’s Mission Statement,” said Geneseo President Denise Battles. “A great deal of praise goes to the faculty and staff on campus who support our students’ efforts to secure nationally competitive Fulbright awards.”

For the 2018–19 applicant period, Geneseo had a record 19 applications, with eight of the applicants becoming semi-finalists, also the highest number in the College’s history. Finalists will be announced later in the year.

“Being named a Top Producer, the first dedicated SUNY institution ever so designated, and finishing third in the country in our classification are tremendous accomplishments for the College and attributable to the talented, intelligent, and multi-skilled students that Geneseo attracts, as well as the dedicated faculty and staff members who educate and foster them” said Michael Mills, director of National Fellowships and Scholarships. “Graduates of Geneseo tend to see themselves as citizens of the world, as most Fulbright awardees have studied abroad and many traveled extensively. Becoming a Fulbrighter is often a truly life-changing experience for our students, offering the opportunity of total immersion into another culture as an ambassador of the United States.”

Since its inception in 1946, the Fulbright Program has provided more than 380,000 participants — chosen for their academic merit and leadership potential — with the opportunity to exchange ideas and contribute to finding solutions to shared international concerns. More than 1,900 U.S. students, artists and young professionals in over 100 different fields of study are offered Fulbright Program grants to study, teach English, and conduct research abroad each year. The Fulbright U.S. Student Program operates in more than 140 countries throughout the world.

The Fulbright U.S. Student Program is a program of the U.S. Department of State, funded by an annual appropriation from the U.S. Congress to the Bureau of Educational and Cultural Affairs, and supported in its implementation by the Institute of International Education.

The U.S. Student Fulbright competition, which is open to students and recent alumni, is administered at Geneseo by the Director of National Fellowships and Scholarships, Michael Mills, who can be reached at millsm@geneseo.edu and (585) 245-6002. More information about the Fulbright and other nationally and internationally competitive scholarship and fellowship programs can be found at www.geneseo.edu/fellowships_and_scholarships.