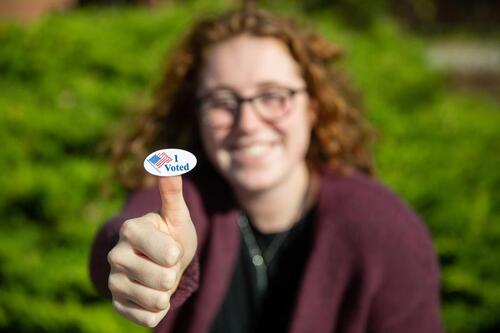 Student voting on the SUNY Geneseo campus rose by almost 600 percent in last year's election, according to a report by the National Study of Learning, Voting, and Engagement (NSLVE). The number of Geneseo students who voted increased from 335 in 2014 to 1,994 (or from 6.3 to 37.5 percent of students) in 2018.

"These numbers reflect Geneseo's hard work of not only getting students registered but getting them to the polls," said Nicholas Palumbo, assistant dean of students for leadership and service.

The NSLVE is conducted by the Institute for Democracy and Higher Education (IDHE) at Tufts University’s Tisch College of Civic Life. The study shows that nationwide, the voting rates at participating college campuses doubled on average compared to the previous midterm election in 2014. In 2018, the Average Institutional Voting Rate (AIVR) among campuses in the study was 39.1 percent, nearly 20 percentage points higher than 2014’s average turnout rate of 19.7 percent. Geneseo’s AIVR was 37.5 percent, more than 31 percentage points higher than its rate in 2014—meaning that its voting rate increase was nearly 12 percentage points higher than the national average. Turnout increases were widespread, with virtually all campuses seeing an increase over 2014.

“I am continually astonished by the deep commitment of our students to educate and motivate their fellow peers to participate in our political process,” said Palumbo. “Our commitment to civic responsibility challenges Geneseo students to engage in our democratic processes and creates the conditions for the development of ethical and engaged citizens.”

Previously, SUNY Geneseo has been recognized by National Voter Registration Day for its student-led voter registration efforts. The College has also been designated a “Voter-Friendly Campus” by the national nonpartisan organizations’ Campus Vote Project (CVP) and NASPA-Student Affairs Administrators in Higher Education.

The NSLVE is the only national study of college-student voting. It is based on the voting records of more than 10 million students at more than 1,000 colleges and universities in all 50 states and the District of Columbia; IDHE does not receive any information that could individually identify students or how they voted. The study provides reports to participating colleges and universities, like SUNY Geneseo, which use them to support political learning and civic engagement as well as to identify and address gaps in political and civic participation.

The full campus report may be viewed online.