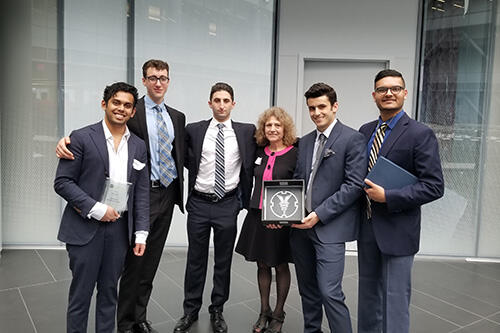 Team Volt-Air Technologies received the honor and $10,000 for advancing its “asynchronous magnetic resonance” as a wireless charging option for drones. Volt-Air is a collaboration with SUNY Oswego and the SUNY Research Foundation with Geneseo leading the commercialization efforts. More than 100 teams from across the state competed for 18 prizes. Twelve of the teams were from the Finger Lakes area, including three from Geneseo.

“Volt-Air’s win was a remarkable accomplishment for undergrads from a small liberal arts college,” said Judy Albers, the Charles L. “Bud” VanArsdale Endowed Chair for Entrepreneurship at Geneseo. “Our teams were facing stiff competition and to come out on top in this track illustrates the tremendous focus these students must have in recognizing the commercial potential of a technology and then effectively communicating that potential in their presentations to the judges.”

A few days prior to NYBPC, Volt-Air received a $50,000 grant from the National Science Foundation to participate in the National I-Corps Program starting in July. The grant positions the team well for future Small Business Innovation Research grants, which can extend in the millions of dollars.

Other Geneseo VentureWorks teams competing in the finals this year were BeaconOn, which is developing a baby car alarm system, and The Forgotten Closet, a resale venture of vintage clothing. Those two teams will join other teams from this semester’s VentureWorks class in positioning to advance. BlueRescue, a system to deliver blueprints to firefighters via an app, and The Forgotten Closet are both applying for on-campus ambassadorships in Geneseo’s Center for Inquiry, Discovery and Development. Awa+, which manufactures water bottles with a social mission, and BeaconOn will be moving forward with the support of the technology inventors at BZ Design and Tailwind Innovations. In addition, Geneseo Professor of Biology Sid Bosch and inventor Karl Hanafin plan on promoting InteliLake Technology as an affordable early warning proxy for harmful algal blooms. Determining causes of such blooms in area lakes has been a key research interest for Bosch.

NYBPC enables each student-led team to explain their innovation in a set amount of time, with teams competing against others whose products, services, or developed ideas fall within a similar category, or track. Participants gain valuable experience going before panels of national venture capitalists, angel investors, investment bankers, and seasoned entrepreneurs who serve as judges; they provide the student teams with important feedback and a chance to understand how their pitch might be received as they step into the “real world.”