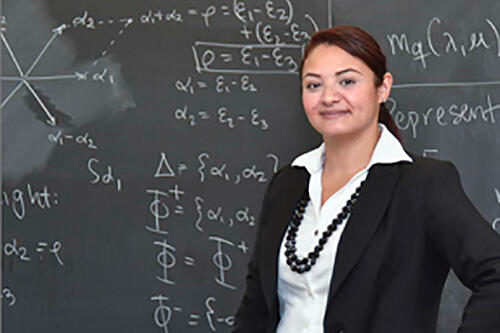 Against a backdrop of national debate on the fate of the Deferred Action for Childhood Arrivals (DACA) program, mathematician Pamela Harris from Williams College will deliver a campus lecture titled “The Lonely Reality of an Academic Dreamer,” Jan. 25 at 7 p.m. in Newton 202. Her talk is part of Geneseo’s Math Research Weekend (MRW) Jan. 26-27 and is free and open to the public.

Harris, assistant professor in Williams’ Department of Mathematics and Statistics, is an award-winning mathematician who also was a “dreamer.” Created in 2012, the DACA program affords protections to undocumented immigrants who have lived and worked in the U.S. since childhood.

In her lecture, Harris will share her life story, including her fears of being an undocumented first-generation college student, the challenges she overcame as a woman of color with a passion for STEM, and the support networks and mentors that helped shape her identity as a scientist. She also will discuss how communities can help support underrepresented minorities and undocumented students achieve their full potential as they pursue their academic careers.

Mathematics Department Chair Caroline Haddad first met Williams at a Research Experiences for Undergraduate Faculty workshop several years ago. “What she has accomplished so early in her career thus far is amazing. She’s a rising rock star in the mathematical community,” Haddad said, “and she’s a former ‘dreamer’ on top of that, which makes her story even more compelling.”

Harris immigrated to the United States from Mexico when she was 12. After graduating from high school in Milwaukee, Wis., she earned an associate degree from Milwaukee Area Technical College, followed by a bachelor’s degree from Marquette University, and a master’s and doctorate from the University of Wisconsin-Milwaukee — all in mathematics.

Prior to joining Williams College, Harris served as a Davies Research Fellow, awarded by the National Research Council, at the Army Research Lab in Adelphi, Md., and before that, taught at the U.S. Military Academy at West Point.

MRW gives selected students exposure to mathematical research as well as areas of study not covered in the standard curriculum. Speakers who are experts in an emerging area of research deliver a lecture and lead a master class in which students potentially provide a solution to a research question.

Harris’ research centers on algebra and combinatorics, particularly as these subjects relate to the representation theory of Lie algebras. Her recent research on vector partition functions has been supported through awards from the National Science Foundation and the Center for Undergraduate Research in Mathematics.

Her MRW lecture, “Invisible Lattice Points,” will address not only mathematical concepts, but hints at the invisibility associated with the underrepresentation of women and minorities in the mathematical sciences. Harris is involved in several initiatives to help bring more visibility to the mathematical contributions of Latinx and Hispanic mathematicians. She currently co-organizes research symposia and professional development sessions for the national conference of the Society for the Advancement of Chicanos/Hispanics and Native Americans in Science.

First held in 1991 and now annually since 2015, MRW helps Geneseo math students achieve their professional and educational goals.“Participating in the Math Research Weekend showed me that it was possible to do math for fun, and to take ownership of my own mathematical creation,” said Rachel Schwell ’00 (mathematics and French), now an associate professor of mathematical sciences at Central Connecticut State University. “It was my first exposure to using my mind in such a freeing way, and it made me realize that I had more research potential than I thought. MRW began my journey into mathematical research and it never stopped from there.”