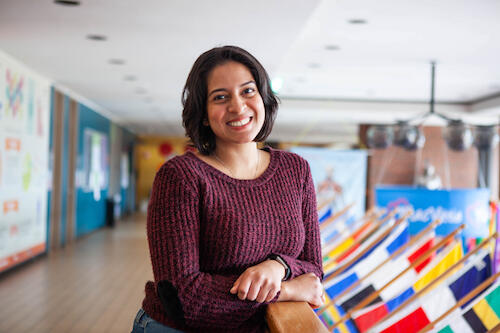 Imasha Silva ’19 chose to come to Geneseo to study from her home in Sri Lanka because it was her dream to earn a U.S. college education, and her brother, Malan Silva ’09, had such a positive experience pursuing his education here.

“He was convinced that his liberal arts education allowed him to be broad-minded and the person he is now,” says Silva. “He is now a postdoctoral researcher at the University of Utah, and I could not agree with him more. I love that I can take classes from different fields. I see the world in a broader light.”

Silva chose to major in mathematics because she loves the problem-solving inherent in the discipline.

“I love the challenge,” she says. “It is facts and procedure yet it helps you approach a solution in many ways.”

This year, Silva is an assistant resident director in Putnam Hall. Previously, she was a mentor and resident assistant for international students. In both positions, she says, she helps resolve conflicts and issues that may arise among student residents. While math may not seem directly relatable, she draws on those problem-solving skillsby listening and trying to understand each student’s perspective and not jumping to the first possible solution.

“Mathematics has trained me to see other solutions and more possibilities,” she says, “and I use it to see where each person is coming from.”

Silva believes those traits will help her in life and her future career, whatever that may be. After graduation, she may pursue a master’s degree in mathematics in the United States or return to Sri Lanka and pursue a law degree.

Silva says she appreciates all the different experiences available at Geneseo, from being an assistant resident director to singing in the Geneseo Festival Chorus, and from being a member of the PRISM math club to participating in Shakti, the College’s South Asian club.

She sought a leadership role in the residence hall and was a mentor because professors and students made her feel welcome and included.

“They were wonderful with me,” she says. “I have grown much more independent, and I have learned to love and respect diversity even more. I wanted to give back to the community.”