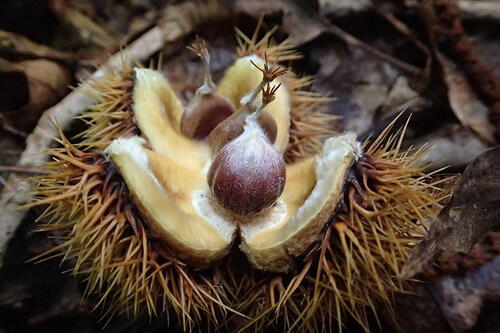 The American chestnut tree, once prized for its lumber and nuts, was made functionally extinct by an invasive blight fungus in the early 1900s. Work is currently underway to develop a blight-resistant variety through breeding and genetic engineering. With the potential reintroduction of American chestnut in the Eastern United States, researchers are mapping its historical distribution and examining the conditions that will best support the tree’s reestablishment.

In a new article in Forest Ecology and Management, Assistant Professor Stephen Tulowiecki, a geographer at SUNY Geneseo, predicted the historical location of chestnut by comparing observations of the species recorded by land surveyors from 1797–1799 with environmental conditions. His models discovered that the trees prefer acidic and sloping terrain, enabling him to predict and map the historical existence of the American chestnut in Western New York (WNY). Tulowiecki then compared the model predictions to current land ownership. Of the WNY region examined, 28–50 percent was suited to the trees; of that amount, only 8–11.5 percent falls within protected land parcels. (Map below shows Tulowiecki's model predictions for where American chestnut was located circa 1798. Darker colors indicate a higher likelihood of American chestnut. Click on map to view in new window.)

“Since most of the land that the American chestnut favors in Western New York is privately owned, the successful reintroduction of the tree may depend on the willingness of private landowners along with the cooperation of governments and non-governmental agencies,” Tulowiecki said.

American chestnut was a valuable economic and ecological species in the Eastern United States. The massive trees produced wood that was prized for its strong, straight grain and resistance to rot. And the chestnuts themselves were important to wildlife and as fodder for livestock. Though the trees still exist today—sprouting from the stumps of earlier afflicted trees—they wither and die back to the ground as saplings.

Tulowiecki notes there have been many instances of invasive species that have had major impacts on tree species in the US. “We’re currently dealing with hemlock woolly adelgid, and emerald ash borer is just moving through the campus now,” Tulowiecki said. “But chestnut blight was one of the earliest examples of invasive species with disastrous consequences that really captured the public's attention.

“The reintroduction of chestnut to forests of the Eastern United States may provide a template for reintroducing other species that are functionally extinct or extinct. But, there are ethical debates going on about whether humans should engineer species to be introduced into the wild,” Tulowiecki said.