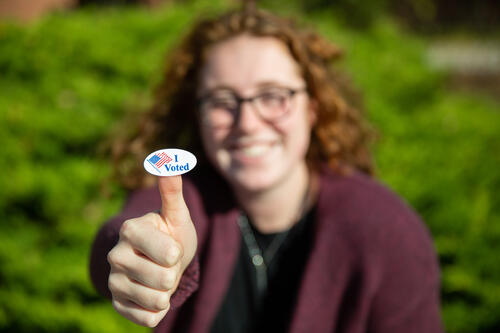 Just in time for Election Day, SUNY Geneseo was named to Washington Monthly’s "2018 America’s Best Colleges For Student Voting" list. A part of The College Guide and Rankings — which rates higher educational institutions on their contributions to social mobility, research, and public service — this is a first-of-its-kind list of the schools doing the most to help their students become engaged citizens.

“SUNY Geneseo students do not merely talk about our institutional values; they act upon them forthrightly and relentlessly,” says Nicholas Palumbo, Interim director of Leadership and Service at Geneseo. “In preparation for the 2018 midterms, our students demonstrated our shared commitment to civic responsibility through their tremendous voter registration efforts. The efforts of Andrew Goodman Vote Everywhere Ambassadors, GOLD Leader Mentors, and other student organizations and volunteers registered 1,034 students this fall alone.”

The campus polling site, District 5 in Geneseo, is made up of 1,642 of our registered students living on-campus, according to the local board of elections latest figures. During the during the 2016 presidential election, only 1,205 on-campus students were registered to vote on campus.

Earlier this year, the Washington Monthly college rankings introduced measures of how well colleges are encouraging their students to vote. Using data from the ALL IN Campus Democracy Challenge and the National Study of Learning, Voting, and Engagement (NSLVE) at Tufts University, the resulting list of colleges met all four scoring criteria:

Geneseo’s inclusion on the list demonstrates the College’s commitment to promote civic engagement and to encourage students to vote and actively participate in their community.

According to Washington Monthly, “Since voting habits tend to crystallize in young adulthood — vote in one election, and you’re far more likely to do so again — colleges and universities have an unparalleled opportunity to create voters not just for the next election, but for life. The colleges that invest in student voting aren’t just helping their Washington Monthly rankings — they’re helping the country.”

Geneseo participates in the National Study of Learning, Voting, and Engagement (NSLVE), which offers schools an opportunity to learn their student registration and voting rates.