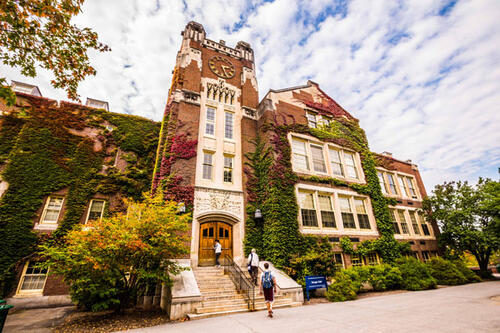 The six-month fellowship is intended to provide Broomfield support to pursue scholarly research and writing to further his academic career. He’ll serve as a fellow from June to December 2016 and will include work at the New York Library for the Performing Arts, The Schomburg Center for Research in Black Culture, The Library of Congress (home to the Alvin Ailey American Dance Theatre archive), Jacobs Pillow, and Duke University.

The $15,000 award will provide partial salary support for Broomfield during his fellowship leave period. The award also provides $750 for research, travel or publication costs, and support to attend a Career Enhancement Retreat.

Broomfield, who was a communication major at Geneseo, received his doctorate in critical dance studies. He has danced with Cleo Park Robinson Dance, performing in leading works by some of the most diverse and recognized African American choreographers in the American modern dance tradition. He’s been on the Geneseo faculty since 2012.

In 2013, Broomfield was one of five SUNY faculty members who received support through SUNY's Faculty Diversity Program, designed to assist campuses with the recruitment, retention and promotion of outstanding scholars from different backgrounds. The system's state-operated campuses compete for salary support and start-up packages to recruit outstanding scholars who have attained a record of distinction, including individuals from groups that have been historically underrepresented in higher education.

From 2006-09, Broomfield was a Ford Foundation predoctoral fellow through the National Research Council of National Academies.