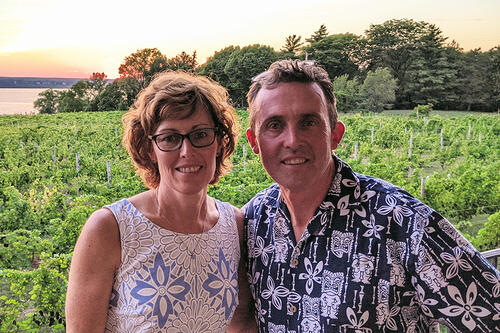 Doug ’89 and Stephanie Nelson ’89 Dickman met as first-year students in the Geneseo Chamber Singers, a premier ensemble that has earned regional, national, and international reputations for its performances.

“We would meet at choir at 5 o’clock, and a group of us would go to dinner afterward and hang out. That’s how we met,” says Stephanie, who was a physics major at Geneseo.

The Chamber Singers were a big part of the Dickmans’ lives. Between their sophomore and junior year, they went on tour and performed in Italy. “There is something almost indescribable about making beautiful music with a tight-knit group of people in some amazing spaces to appreciative audiences,” says Doug, who was a business/management information systems major.

Their affinity for Geneseo has grown over the decades and they have given back with their time, expertise, and contributions to provide opportunities for students.

Giving Back to Geneseo

The Dickmans became supporters of the college through charitable giving early on. After graduating from Geneseo and earning masters’ degrees at other institutions, Doug and Stephanie got married.

“We started giving back in small amounts,” says Stephanie, “but Geneseo has been the mainstay of our charitable giving over the last 30 years.”

Among the many ways they give back to Geneseo, the Dickmans have provided support for the Chamber Singers — especially for European tours. “We found that to be an amazing experience,” says Stephanie. They have also supported the physics department, which, Stephanie says, prepared her very well for grad school.

Recently, the Dickmans made a significant gift to support Geneseo. Their donation has no specific restriction; they want Geneseo to use it where it is needed most.

“Needs fluctuate and that gives the school the flexibility to put the money where they need it today,” says Doug. Compared to other private colleges and universities, the Dickmans say they give to Geneseo because their need is greater, given reductions in state funding and a smaller endowment for scholarships, program, and faculty support.

“Right now, Geneseo needs the support of alumni more than ever,” says Doug. “As students, we had formative experiences that depended on funding from the state, which doesn’t have the money to support the colleges like they used to. It’s important for students today and into the future to be able to have those experiences that we were fortunate enough to have.”

Giving As A Value

Giving back has long been part of the fabric of the Dickman family. Even in the wake of tragedy, the Dickmans found a way to help others, too. In 2019, they lost their 16-year old daughter, Sarah, to suicide. In memory of Sarah, Doug and Stephanie's son, Connor, wanted to bike the Erie Canal from Buffalo to Albany to raise awareness of suicide prevention for the American Foundation for Suicide Prevention. Doug joined Connor, and together, they raised more than $11,000.

“Our kids have always seen us give back,” says Stephanie. “For example, at Christmas, we would give donations to organizations or volunteer, and we would let them get involved, so it was in Connor’s nature to want to honor his sister like that.”

Looking back at their Geneseo experience, the Dickmans value a liberal arts education. “It makes people more well-rounded—better humans, better leaders, and more aware of their surroundings,” says Doug. “Supporting a really good liberal arts college like Geneseo is important in today’s world.”

They fondly remember their time on campus in the ’80s. Aunt Cookies was one of their favorite places, as well as The Donut Shop on the corner of Main and Center Streets. “We had less stuff—definitely fewer electronics,” says Stephanie. “Most students had some kind of musical system like a cassette player or stereo. It was fun, and I loved it.”

The Dickmans are members of Geneseo’s 1871 Leadership Society, which recognizes donors who give $1,000 or more each year. Doug has worked in the information systems field for more than 25 years and is retired from Exelis (formerly Eastman Kodak) after 20 years of service followed by two years as a small business owner. Stephanie works for L3Harris Technologies as VP of Strategy and New Business Operations, Space and Airborne Systems. Doug also volunteers at the Rochester Museum and Science Center, Foodlink, Lollypop Farm, and Meals on Wheels.