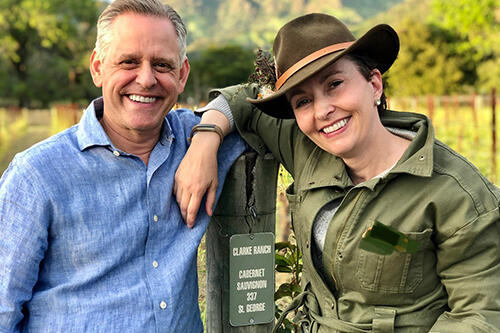 Building Others Up through Education, Philanthropy

Jeff Clarke ’83 and his spouse, Suzette, are longtime supporters of SUNY Geneseo. They have been at the heart of engaging Geneseo alums for years, and Jeff’s participation on the Geneseo Foundation Board of Directors was critical to the Shaping Lives of Purpose capital campaign for the College.

They have also supported the College in many areas, from the School of Business and Student Managed Investment Fund to Geneseo’s athletic teams. Recently, Jeff made a gift to the Jeff Clarke Economics and Political Science Fund, an endowment he set up in 2005. The fund supports a variety of activities in those departments, including professional development of faculty and students and participation in events such as the College Fed Challenge, a competition in New York City that tests students’ economic skills and teamwork.

His endowment provides opportunities for Geneseo students that were important to Jeff when he was a student. “I feel that my donations to Geneseo can have an outsized impact on students,” says Jeff. “That little bit extra goes a long way.”

Education is a philanthropic priority for Jeff and Suzette.

“We both grew up middle class,” says Jeff. “We didn’t have a lot. I did work-study even though it was a SUNY college. I took out the maximum loans.”

Those efforts paid off, and Jeff has since built a successful career in business. Much of his experience has been at the top of major companies, including Eastman Kodak, Travelport, Orbitz, and now FTD, one of the world’s largest floral networks, where he is currently executive chairman. His leadership roles with those companies have also given him a unique perspective of how philanthropy can make a difference in communities.

“When you’re leading a large organization, you see the power of companies, and you get to know leaders who drive community involvement — and you bring your corporation into it, but more importantly yourself into it,” says Jeff.

When he was CEO of Eastman Kodak, Jeff saw how much companies and organizations could provide to communities. He believes that those who have the privilege to lead big institutions should use that influence and the money they earn to give back.

Jeff’s passion for giving back to education was influenced early on.

“My wife and I came from families that were educators,” says Jeff. “My grandfather was dean of students at Ithaca College; my father taught at Colgate University for 40 years, and my wife's parents were both teachers. So, for us, even though I chose to go into the world of business and my wife into journalism, we fundamentally believe that education is an important, core opportunity in America.”

Education gives people the flexibility to explore different fields, Jeff says, and SUNY Geneseo was the perfect place for him. “Professors were incredibly engaging,” he says. “There’s not a day I don’t think about faculty such as David Martin, Ed Janosik, and Gregor Lazarcik, who formed much of the way I think and the way I continue to learn.”

Jeff says that he also gives back because of the people he went to Geneseo with, many of whom are lifelong friends. He has also connected with others through alumni groups, and as a Geneseo Foundation board member from 2006 to 2014, he built relationships with fellow members, including Jack Kramer ’76, Kevin Gavagan ’75, Jennifer Dunlap ’81, and Joseph Carr '82.

“That builds a community and makes you think beyond your four years there,” says Jeff.

“Geneseo has provided many this unique academic and personal enrichment experience for decades and continues to do so. It’s extraordinary how many people have had successful careers in many different fields.”

Reflecting on his days as a student, Jeff loved the town and gown of Geneseo and the College. “The ability to get to know locals, support local businesses, and the interaction between the faculty and administration into those communities was amazing,” Jeff says.

Jeff Clarke ’83 earned his bachelor’s degree in economics with a minor in political science and an MBA from Northeastern University. He and Suzette live in San Francisco, California.