The National Fire Protection Agency (NFPA), in section 704 of the National Fire Code, outlines a system for identifying the hazards associated with materials. The information contained in this section and the linked sections below comes directly from the 1990 edition of NFPA 704. Although the system was developed primarily with the needs of fire protection agencies in mind, it is of value to anyone--including students enrolled in chemistry laboratory courses--who need to handle potentially hazardous material.

The hazard identification signal is a color-coded arrangement of numbers and/or letters arranged in a diamond shape. An example is shown below. You have probably seen hazard diamonds like this on trucks, storage tanks, bottles of chemicals, and in various other places. The blue, red, and yellow fields (health, flammability, and reactivity, respectively) all use a numbering scale ranging from 0 to 4.

A value of zero means that the material poses essentially no hazard, and a rating of four indicates extreme danger. The white field is reserved for "special precautions".

Other values sometimes appear here as well, including indicators for substances which are acidic, alkaline, corrosive, or those which present a radiation hazard.

Here is a summarized explanation of what the numbers mean. 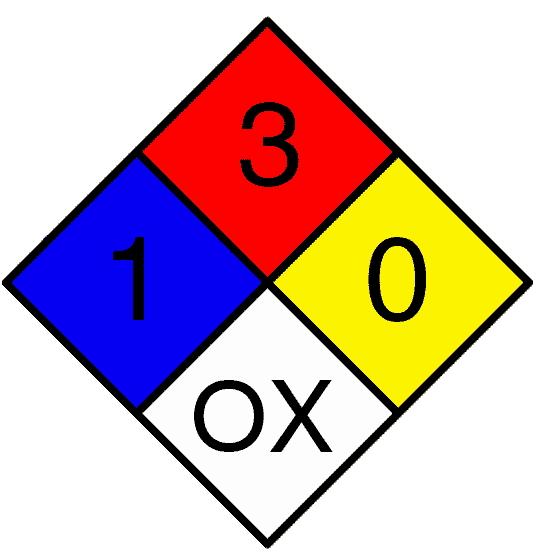 The Hazardous Material Information System (HMIS) is a labeling system developed by the National Paint and Coatings Association (NPCA) and sold through Labelmaster, Inc. An example of a HMIS label appears to the right. This system uses a label with four color bars and a blank bar at the top where the name of the chemical should appear. The HMIS system uses blue, red, and yellow colored bars. These bars indicate, respectively, the health, flammability, and reactivity hazards associated with the material. A numbering scale ranging from 0 to 4 is used in each of these bars, with a value of zero indicating that the material poses essentially no hazard, and a rating of four indicating extreme danger. The fourth, white bar is marked "personal protection". A letter (the letters used are A through K, and X) is placed in this bar to indicate the kind of personal protective equipment which should be used to safely handle the chemical.

Another very similar labeling system, the Hazardous Material Identification Guide (HMIG), was developed and is sold through Lab Safety Supply. This system is identical to HMIS with the exception that the fourth, white bar is marked "protective equipment" in the HMIG system.

Although the details of how numbers are assigned may vary somewhat between systems, the HMIS/HMIG system is essentially the same overall scheme as is used in the NFPA system, but there are differences. 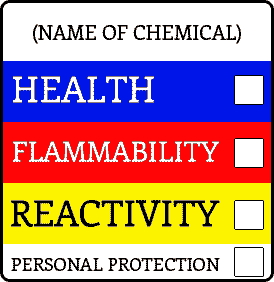 3.   The Differences Between NFPA and HMIS

As explained above, both the NFPA and HMIS/HMIG systems are similar to the extent that both use the same colors to indicate the hazards associated with a chemical (blue for health, red for flammability, and yellow for reactivity). Both systems also use a scale of 5 numbers (0 through 4) to represent the relative degree of the hazard, 0 indicating the least and 4 indicating the most hazardous.

The differences between the systems are minimal, with one exception. Obviously the layout differs (NFPA using 4 diamonds and HMIS/HMIG using stacked bars), but the most significant difference is the intended audience for each of the systems. The HMIS/HMIG systems were designed to be compliant with the HCS, and targets employees who must handle hazardous chemicals in the workplace. The NFPA system, however, was developed to alert firefighters to the hazards of materials present at the scene of a fire. Therefore the numbers assigned in the NFPA system assume that a fire is present. Since no such assumption is made with the HMIS/HMIG system, hazard ratings can differ from system to system, even for the exact same chemical.

It should also be noted that the manufacturers of chemicals and materials assign hazard ratings, rather than the government. Therefore, number values will change from manufacturer to manufacturer according to their individual interpretation of the level of hazard present.

4.   Where to Find Hazard Ratings

The source of all published NFPA ratings is, of course, the NFPA. Some NFPA Standards which list ratings are NFPA 49, "Hazardous Chemicals Data," and NFPA 325, "Guide to Fire Hazard Properties of Flammable Liquids, Gases, and Volatile Solids." HMIS/HMIG ratings can be found in some vendor and manufacturer catalogs, such as Spectrum.