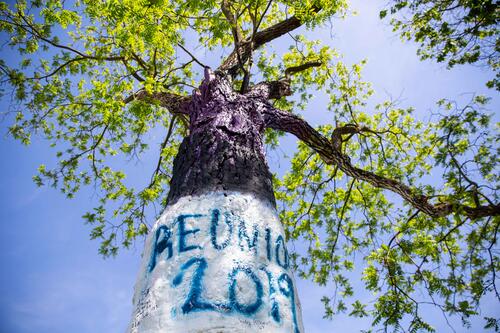 Geneseo’s President Denise A. Battles and Denise Reed Lamoreaux ’84, president of the SGAA, honored the three award recipients during the Reunion Signature Brunch on Saturday.

John Lombardo ’74, founding member, guitarist, and singer with the band 10,000 Maniacs, received the Professional Achievement Award, which is given to graduates who have achieved extraordinary distinction in a chosen field. Lombardo’s music career spans 40 years. 10,000 Maniacs, formed in the 1980s, had a major impact on alternative music and is among the most critically acclaimed bands of the period.

Chad Salitan ’09 received the Outstanding Young Alumni Award for early achievement in a profession, field, or service to the College or community. Salitan has risen through the ranks at the U.S. State Department, working with the management team to lead the federal government’s diplomatic engagement on sex trafficking and forced labor. He has received nine awards from the State Department during his tenure, including the Superior Honor Award three times.

Marilyn Moore received the Alumni Association’s Honorary Membership Award, given to non-alumni who have made outstanding contributions to the SGAA and the College. Moore began her 31-year career at Geneseo as an athletic trainer in 1979 and served as director of intercollegiate athletics from 1999 to 2010. Under her tenure as athletic director, Geneseo won 69 SUNYAC titles, 51 SUNYAC Coach of the Year awards, and its first SUNYAC Commissioner’s Cup for overall conference excellence during the 2002–03 academic year.

Reunion 2019 also celebrated the 50th anniversary of the Class of 1969. The gold anniversary was marked with a pinning ceremony, which inducted class members into the 50-Year Club. The event also featured other class milestone anniversaries, golf outings, a lifelong-learning program, campus tours, sorority and fraternity gatherings, and a block party in the village.