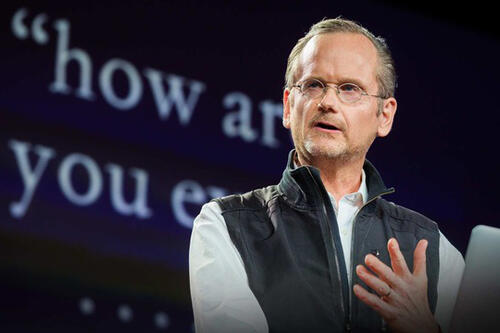 Called “the most important thinker on intellectual property in the Internet era,” by The New Yorker, Creative Commons founding member and Harvard law professor Lawrence Lessig will deliver the Open Education Week’s keynote address at 7:30 p.m., Wednesday, March 6 in Wadsworth Auditorium. Lessig’s talk, “On the Obligations of Scholars,” will be followed by a Q&A session and a book signing for America, Compromised. Copies will be available for sale. The event is free and open to the public, but registration is appreciated.

Lessig is the Roy L. Furman Professor of Law and Leadership at Harvard Law School. He has also taught at Stanford Law School, where he founded the Center for Internet and Society, and at the University of Chicago. He has focused much of his career on law and technology, especially as it affects copyright.

“Lawrence Lessig has spent his career thinking deeply about the opportunities and obstacles our society faces in the effort to democratize access to knowledge and culture,” said Professor Paul Schacht of Geneseo’s Department of English. “I'm excited to hear his ideas on the special role scholars can play in this effort, especially scholars in a system like SUNY, whose scale and reach give it unparalleled power to advance the public good through greater openness.”

Lessig is a founding board member of Creative Commons and serves on the Scientific Board of AXA Research Fund. He is a member of the American Academy of Arts and Sciences and the American Philosophical Association. His current work addresses institutional corruption — relationships which, while legal, weaken public trust in an institution — especially as that affects democracy. His books include Fidelity and Constraint (forthcoming 2019), America, Compromised (2018), Republic, Lost (2015, 2011), Remix: Making Art and Commerce Thrive in the Hybrid Economy (2008) and others.

Lessig holds a B.A. in economics and a B.S. in management from the University of Pennsylvania, an M.A. in philosophy from Cambridge University, and a J.D. from Yale.

In addition to Lessig’s Keynote, Open Education Week, a global event that seeks to raise awareness of free and open sharing in education and the benefits they bring to teachers and learners, will be celebrated on Geneseo’s campus with speakers, panel discussions, and other conversations.