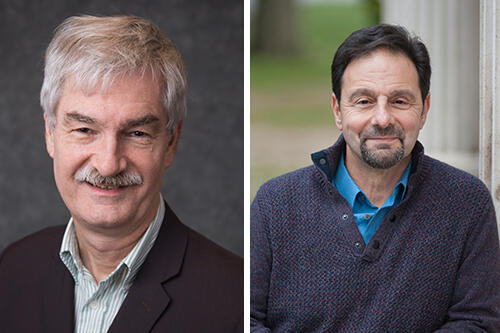 Two Geneseo faculty members have been awarded the rank of Distinguished Professors by the SUNY Board of Trustees. Distinguished ranks are the highest honors awarded by SUNY.

Gerard Floriano ’84, professor of music and chair of the Department of Music, also serves as the college’s director of choral activities (1998 to present). He has been named a Distinguished Service Professor for his contributions to the College and beyond.

“I am delighted at the selection of Dr. Floriano as SUNY Distinguished Service Professor and Dr. Goeckel as SUNY Distinguished Professor,” said President Denise A. Battles. “The attainment of these ranks evidences the quality of their individual professional achievements and the caliber of Geneseo’s faculty more broadly."

Goeckel joined the Geneseo faculty in 1982. He currently teaches international and comparative politics and is a specialist on European politics, particularly politics in Germany, eastern Europe, and the former Soviet Union. His research focuses mainly on the relationship between church and state and the role of religion and politics, including the Communist period.

Among his many accomplishments, Goeckel has received several Fulbright/IREX awards and has published widely in major university presses and leading journals. He was instrumental in implementing and coordinating the college’s international relations major. In 2004, Goeckel received the SUNY Chancellor’s Award for Internationalization. He organized and led the Geneseo in Moscow study programs (2004–12), which were held at Moscow State University. In 2000–01, Goeckel served as director of the SUNY Center for Study of the U.S. and Russia at Moscow State University—and earlier was a member of German President Johannes Rau's Study Group on the Role of the East German churches (1992–95).

Goeckel earned a bachelor’s degree in political science and a master’s degree in public policy at the University of Michigan and a doctorate in government at Harvard University.

"My research afforded me the opportunity to witness and study dramatic political change in such places as East Germany, the Baltics, and Russia,” said Goeckel. “It has been rewarding to convey that experience to my Geneseo students, as well as encourage them to go outside their comfort zone to study abroad in a very different political context, just as I encountered Communist countries as an undergraduate."

Floriano began teaching at Geneseo in 1998 after a 10-year career as a music teacher in the Greece, N.Y., public schools. He earned his bachelor’s degree in music at Geneseo, followed by a master of music and doctor of musical arts degree with a focus in orchestral conducting at the University of Rochester's Eastman School of Music.

As a Geneseo student, Floriano was a member of the acclaimed Geneseo Chamber Singers and has served as its director since 1998. Under his leadership, the group has embarked upon six international concert tours. As director of choral activities, he has served as the director of the Geneseo Festival Singers, Spectrum, and Geneseo Men's Choir. He also designed the Department of Music’s first advisement track for music education in partnership with the Eastman School of Music to prepare Geneseo graduates for the master of arts with New York State professional certification in music K–12. Eight new music majors were accepted into the program in 2019–20. He also administers and conducts the quinquennial Geneseo Chamber Singers' reunions, which began in 1983.

Floriano is the founder and artistic director of Finger Lakes Opera, now in its ninth season. Described as the "one of the most vibrant arts organizations in western New York," by Anthony Dean Griffey, operatic tenor and professor of voice at the Eastman School of Music, Finger Lakes Opera was granted Professional Company Member status at Opera America in 2019. Through his many and varied experiences as music director of the Greater Buffalo Youth Orchestra, resident conductor of the Brevard Summer Music Festival, and director of the Italy Opera Viva! Conductor's Institute in Verona, Italy, Floriano’s teaching, service, and conducting reaches throughout New York state, the nation, and abroad.

At Geneseo, he serves as the chair of the Department of Music while also teaching and directing Chamber Singers and Festival Singers. In 2007–08, Floriano received the SUNY Chancellor’s Award for Excellence in Scholarship and Creative Activity.

Distinguished Professors are chosen for their national or international prominence and a distinguished reputation within their field through significant contributions to the research and scholarship, or through artistic performance or achievement in the fine and performing arts. There are currently 20 Geneseo faculty members teaching at Geneseo who have earned Distinguished Professor ranks from SUNY.