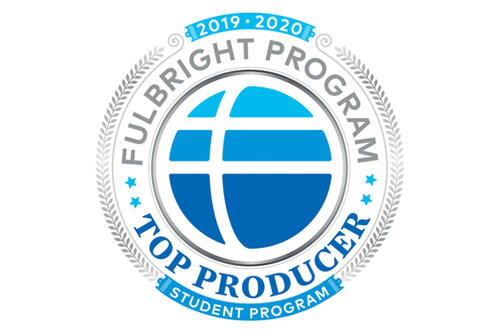 Geneseo has been named a Top Producer of U.S. Student Fulbright awards for 2019–20. (Image provided)

For the third time in the college’s history and the third consecutive year, SUNY Geneseo has been named a Top Producer of U.S. Student Fulbright awards, the State Department’s Bureau of Educational and Cultural Affairs announced in its annual article in The Chronicle of Higher Education.

Seven Geneseo alumni won U.S. Student Fulbright awards for 2019–20, placing the College third among the 742 Carnegie Classification master’s degree institutions, behind only James Madison University and Loyola University (MD). Geneseo has finished in the top three nationally for the past three years and was the only dedicated SUNY institution recognized as a Top Producer.

For the 2017–18 Fulbright cycle, Geneseo was the first dedicated SUNY institution to be named a Top Producer of U.S. Student awards in any category—bachelor’s, master’s, research, or special-focus four-year institutions. This is the tenth year that the U.S. Department of State has issued an annual list of Top Producer institutions in the Chronicle.

“Our college’s inclusion as a Top Producer for three consecutive years after being the first dedicated SUNY institution to garner that distinction is a point of pride for the entire Geneseo extended community,” said Geneseo President Denise A. Battles. “The Fulbright competition pits our talented and accomplished students and alumni against those of the country’s finest colleges and universities. Our ongoing success is a testament to the high-quality education our students receive and evidences Geneseo’s status as one of the nation’s premier public liberal arts colleges.”

Last year’s seven winners brought the college’s total to 33, with 19 awards coming in the past three years and 29 awards since 2010. For the 2020–21 cycle, Geneseo set a campus record with 36 applications, 17 of whom have reached semifinalist status, outpacing the previous record of 12. Final award winners for 2020–21 will be announced beginning in March.

“Geneseo’s remarkable record in producing Fulbright awards is a recognition of not only our exceptional students but also the many faculty and staff members who give of their time and talents to support these applications,” said Geneseo Provost Stacey Robertson. “We take a great deal of pride in having so many of our talented graduating seniors and alumni chosen in this extremely competitive process to represent not only Geneseo but also the nation as Fulbright ambassadors in these countries.”

Since its inception in 1946, the Fulbright U.S. Student Program has provided more than 390,000 participants—chosen for their academic merit and leadership potential—with the opportunity to exchange ideas and contribute to finding solutions to shared international concerns. More than 1,900 U.S. students, artists, and young professionals in more than 100 different fields of study are offered Fulbright grants to study, teach English, and conduct research abroad each year. The Fulbright U.S. Student Program operates in more than 140 countries throughout the world.

The Fulbright U.S. Student Program was created by the U.S. Department of State, funded by an annual appropriation from the U.S. Congress to the Bureau of Educational and Cultural Affairs, and supported in its implementation by the Institute of International Education. The Fulbright program also awards grants to U.S. scholars, teachers, and faculty to conduct research and teach overseas. In addition, some 4,000 foreign Fulbright students and scholars come to the United States annually to study, lecture, conduct research, and teach foreign languages.