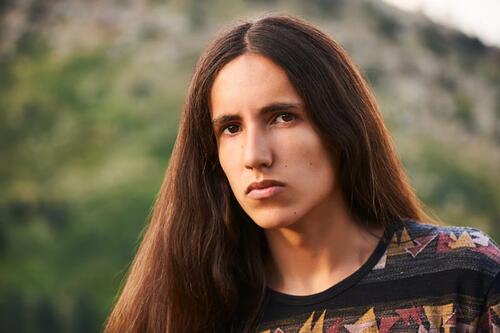 Xiuhtezcatl Martinez, a leader in the indigenous environmental activist community, will deliver the President’s 2018 Sustainability Lecture. The lecture is free and open to the public.

Martinez will deliver “Roots of Revolution” on Wednesday, Oct. 10, at 2:30 p.m. in the MacVittie College Union Ballroom, on the Geneseo campus. The lecture is part of the College’s activities for Campus Sustainability Month, an international celebration of sustainability in higher education.

Martinez is an 18-year-old climate activist and hip-hop artist who is on the front lines of a global youth-led environmental movement. Martinez, who hails from Boulder, CO., has worked locally to prevent pesticides use in parks and to establish a moratorium on fracking in his home state. He is also a plaintiff in a youth-led lawsuit against the federal government for failing to protect the atmosphere for future generations. Martinez is the youth director of Earth Guardians, a worldwide conservation organization.

"The president and the sustainability commission are thrilled to bring Xiuhtezcatl Martinez to campus and he is the youngest President's Sustainability Lecturer we have had," said Margaret Reitz, co-chair of Geneseo’s President’s Commission on Sustainability and assistant director of student life for educational initiatives at Geneseo. "His message is one of action and hope and this speaks directly to our students. Approximately 250 Geneseo students read Xiuhtezcatl's book We Rise: the Earth Guardian's Guide to Building a Movement that Restores the Planet in a common read over the summer and there are multiple courses that are incorporating the book into the curriculum this semester. His message is simple and powerful and encourages action on whatever level we are capable of acting."

“Finding your way in a world where the planet is collapsing, revolution is on the horizon, and youth are rising with the oceans to lead the movements that will shape our future,” Martinez said. “My generation was born into a rapidly changing world. We are facing total systemic collapse on nearly every level on our planet — temperatures are escalating and oceans are rising, as violent weather patterns devastate the world my generation will inherit.

“But Youth around the world are standing up and joining hearts and hands against some of the most powerful industries in the world to build a resilient movement and communities to overcome this crisis,” he said. “Never before has there ever been such an intergenerational opportunity to shape the world we deserve to inherit and want to leave future generations!”

Martinez's work has been featured on National Geographic, CNN, Bill Maher, The Daily Show and other news and information outlets. He has received a number awards including a Nickelodeon Halo Award, a Children’s Climate Prize in Sweden, and he has been named on the Huffington Post Top 10 Movers and Shakers list.