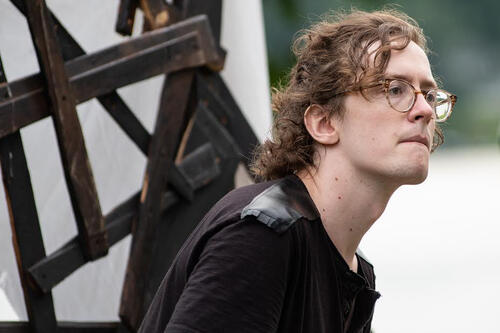 Jeremy Jackson ’16 found a way this summer to combine his two passions: literature and theater.

Jackson, a Hamburg, N.Y. native, served multiple roles both behind the scenes and on stage working with the Shake on the Lake theater troupe during a summer that included 16 performances of a punk rock-inspired “Richard III” in eight Western New York counties.

“I’ve been doing theater since I was 11 years old. I love to be on stage, backstage, every part of it. I can’t not do theater,” said Jackson, who is pursuing a master’s in English literature at the University of Maryland.

For Shake on the Lake, Jackson was assistant director, assistant stage manager and dramaturg — a kind of literary advisor who provides historical and social context for the actors and audience — and part of the acting ensemble.

Josh Rice, co-founder of Shake on the Lake, said Jackson was invaluable to the seven-year-old acting company.“His contributions are numerous, but his eye as a scholar in the room when historical questions arise was such an asset,” Rice said.

Shakespeare’s “Richard III” is the story of the ruthless, plotting man who would be king. Richard, the Duke of Gloucester — whose physical deformities often have him overlooked by others — is determined to gain the crown of England from his brother King Edward IV.

The fast-paced Shake production featured actors in tight jeans instead of breeches, black leather jackets instead of doublets, Doc Martens boots, and a couple of repeating lines from a Sex Pistols songs.

“Although our show was set in a post-punk time, the dramaturg brings in the history of Richard III, War of the Roses and England to make sure that we are staying true to the timeline, plus makes sure that some of the text makes even more sense when you bring in the historical or social context,” Rice said.

Jackson, as an actor, appeared in many of the court scenes and the coronation playing such roles as attendant, servant, and citizen. He was a musician during pre-show entertainment and kept track of props and costumes for the other actors while they were on stage — “a very important role, especially with our small casts,” noted Rice.

The production featured a cast of six, with all of the actors taking on multiple roles.

“The big thing with Shakespeare is how it’s so collaborative. Everyone does everything,” Jackson said after the opening night performance outside the Wadsworth Homestead, Geneseo.

Rice acknowledged Jackson’s talent as a performer — specifically his beat-boxing ability in a single performance of “An Expert’s Guide to Shakespeare,” which was performed as part of an arts festival at Letchworth State Park before Shake’s summer season began.

That performance, Rice said, “blew us away.”

Shake on the Lake has been Jackson’s biggest theatrical outlet since graduation. This was his second year with the company. He was assistant director in 2017 for “Romeo and Juliet.”

“I love Shakespeare,” said Jackson, who was an English literature major and theater minor at Geneseo. “This is right in the middle of my two great loves.”