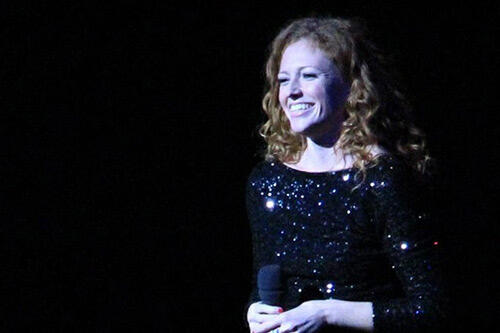 This profile of Marissa Mulder '07 was originally published in the summer 2016 edition of the Scene alumni magazine, which you can read online.

In black pants and white blouse, and with her long, curly red hair, Marissa Mulder ’07 in no way resembles the woman she portrays in her latest New York cabaret show — Marilyn Monroe.

Yet the performance is not the typical flattering revue of the Hollywood icon, but a wrenching portrayal of the star's spiral into depression and self-destruction. "It's a heavy show," Mulder admits. "It's not what you might think."

"Marilyn in Fragments," which opened at the Laurie Beechman Theatre on 42nd Street in May, is the sixth show Mulder has performed in Manhattan since launching her career as a cabaret singer in 2010. Each has won critical acclaim from The New York Times, which dubbed her a "rising cabaret singer" whose "remarkable performance swings wildly between fear and defiance" in a review of her latest show.

Mulder, who grew up in Syracuse, discovered cabaret singing in her senior year at Geneseo. While other musical theatre majors were performing Broadway show tunes for their senior recitals in concert halls on campus, Mulder's vocal coach, the late Alan Case, suggested that a cabaret evening in a more intimate setting would better fit her singing style.

So Mulder performed a selection of contemporary songs, from Stephen Sondheim to Jason Robert Brown, in the Campus House on Main Street. "I just did all of my favorite songs," says Mulder, who had been in four musicals at Geneseo. "And I told stories in between."

Another influential mentor at Geneseo was her theatre professor Randy Kaplan, who taught her the acting skills she would later use in her cabaret shows. Although she had taken voice and piano lessons while attending Catholic schools in Syracuse, Mulder arrived at Geneseo without "a ton of theater training" and eventually took two of Kaplan's acting classes.

"She had serious, serious talent," says Kaplan, who remembers Mulder in the campus production of the Sondheim musical "Company." "She was just compelling. She just really commanded your attention."

In New York, Mulder became discouraged by the endless lines she stood in for hours to sing 20-second auditions for Broadway and off-Broadway shows. But then she was introduced to a cabaret singer from Syracuse who encouraged her to perform an evening of songs at a Manhattan club.

Her break came when she started winning cabaret singing competitions in New York. Competing against 60 other contestants in 2011, she won the MetroStar Talent Challenge, an American Idol-type contest for up-and-coming cabaret artists. Two years later, she created a show dedicated to the American singer-songwriter Tom Waits, which led to more accolades, including the Julie Wilson Award given annually to a promising cabaret singer.

"That was a game changer," Mulder says. "It sort of put me on the map more than anything prior."

Last year, Mulder performed the show, "Tom ...In His Words," at the Lovin' Cup Bistro and Brews, a live music venue outside Rochester. That night, Kaplan was sitting in the audience. She hadn't seen Mulder perform since her student days at Geneseo. "It was astonishing," Kaplan says. "She has that core of belief in herself, and she has the talent to pull it off in a very unique way."

While Mulder hopes to eventually break into Broadway, for now she enjoys bringing her cabaret singing to performing arts centers, jazz clubs, and hotels around the country. "I'm creating a following, person by person, and I'm meeting complete strangers and they're hearing me," she says. "It's really an amazing experience to get to do what I love."