Mistletoe Research May Keep You Healthy 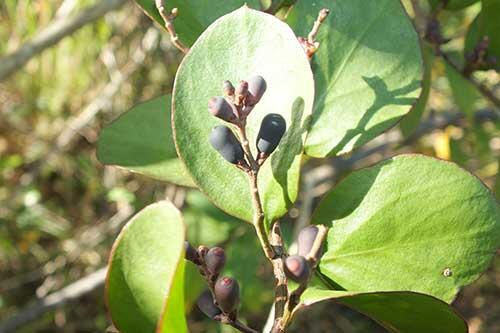 A new study examines the spread of mistletoe—a parasitic plant—and finds that the plant’s success is determined not only by its compatibility with a host tree but also whether or not the plants’ fruiting seasons overlap. Knowing what factors are necessary for the parasite to spread may help scientists better understand the variability of other parasitic interactions, including infectious diseases.

“We wanted to address an ongoing debate about the multiple determinants in the spread of parasitic plants,” says Suann Yang, assistant professor of biology at SUNY Geneseo and co-author of the study published in Journal of Ecology. “But the questions we address also applies to other parasitic relationships, including viruses and bacteria.”

Yang and her collaborators, researchers at The Pennsylvania State University and the Island Ecology and Evolution Research Group (IPNA-CSIC), Spain, conducted the four-year field research project in sections of the University of Puerto Rico’s Finca Montaña, a mix of cattle pasture and forest patches.

“For mistletoe, we found that the availability of suitable host species during germination and establishment is most important,” says Marcos Caraballo Ortiz, a biology Ph.D. candidate at Penn State and lead author of the study. “But, a very close second has to do with the timing of when hosts produce fruit in relation to when mistletoe is fruiting.” 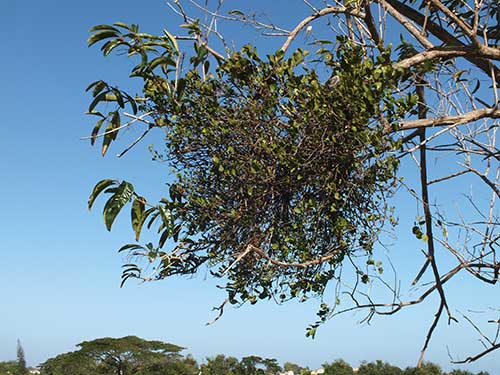 Mistletoe seeds are spread by birds who eat the berries’ nutritious pulp. Like many fruits, the berries act as a laxative, which allows the seeds can pass through the bird quickly without damage. Birds distribute the seeds for germination—seed rain—when they perch.

“Mistletoe is not like a dandelion—its seeds are not spread randomly by the wind,” Yang says. “There is a bit more precision needed—and risk—because it relies on birds to bring its seeds to the right host.”

For the study, the researchers identified the tree species in several forest fragments and tallied the number of mistletoe plants living off the trees. They found that more mistletoe was found on spiny fiddlewood (as shown in the first image) than on any other tree species.

They also found that fiddlewoods were disproportionately favored by seed-bearing birds over the other main host species, the day-blooming jasmine and white indigo berry. Although these other trees are quite common, less than five percent of the mistletoes were on them.

To investigate the discrepancy between host species, the researchers “planted” rows of mistletoe seeds on the branches of eleven plant species (as shown in the second image). Surprisingly, the mistletoe had a very low survival rate on spiny fiddlewood—less than 10 percent compared to other trees where survival rates were higher than 20 percent. Suitability, they found, doesn’t explain why so many mistletoes are found on this seemingly “favorite” host.

“It’s extraordinarily hard for the seedlings to survive on this particular host,” Caraballo says. “But, in the end, we think the majority of the population of mistletoe plants were in these trees because they were ‘flooded’ with seed rain from the birds.”

Birds that disperse mistletoe seeds—gray kingbirds and northern mockingbirds, in particular—don’t tend to bring them to the best hosts; that’s not their goal. Instead, they visit trees that are fruiting and providing food. 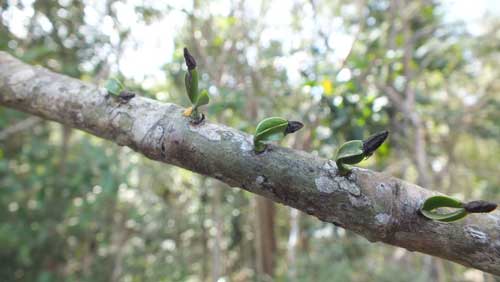 “The presence of fruit on the landscape that the birds prefer can be as beneficial to mistletoe as the presence of a compatible host,” says Tomás Carlo, associate professor of biology at Penn State and senior author. “The fruit of the spiny fiddlewood is one of the top three fruits eaten by gray kingbirds and northern mockingbirds at our study site.

“We found that the eating habits of the birds led them to visit the spiny fiddlewood frequently, and that increased the amount of mistletoe seed that was delivered. This host is filled with the parasitic plant, but it’s not because the majority of the mistletoe seedlings survive on them,” Caraballo explains.

“A broader, community ecology approach like ours, that looked beyond plant species, can yield surprising insights. It’s important to remember that the relationship of a parasite to one host is not independent of the other species that are interacting with them,” Carlo says.

“Similar to how mistletoe spreads through an environment, there are many emerging diseases, like Zika and Dengue viruses, that spread between hosts by a dispersal agent—mosquitoes, in these cases—whose behavior depends on certain environmental conditions or specific preferences. Paying attention to these factors can help us understand why a parasitic plant or disease appears to favor a particular host.”

This research was supported by the National Science Foundation and the Alfred P. Sloan Foundation. Aarón González Castro and Claude dePamphilis also collaborated on the study. Images provided by Marcos Caraballa Ortiz