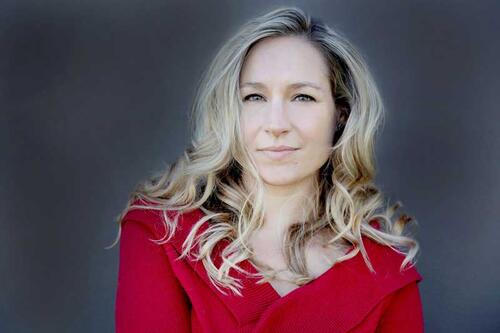 SUNY Geneseo’s Department of Music & Musical Theatre will welcome composer-in-residence Jocelyn Hagen on February 15–17. In addition, her commission of a new choral work in honor of the college’s 150th anniversary will receive its world premiere by the Geneseo Chamber Singers on March 6 at Central Presbyterian Church in Geneseo. The work, titled “Say It Out Loud,” was made possible by generous support from the Office of the Provost and the Department of Music & Musical Theatre.

“Jocelyn is one of the most sought-after and accomplished choral composers of our time,” says Gerard Floriano, SUNY Distinguished Service Professor and chair of the music department and director of choral activities. “We had performed some of her music previously, and I thought she would write a great piece for the choir—and I was right. ‘Say It Out Loud’ is moving and powerful, and the students seem to love it as well.”

Hagen composes music that has been described as “simply magical” (Fanfare Magazine) and “dramatic and deeply moving” (Star Tribune, Minneapolis/St. Paul). She is a pioneer in the field of composition, pushing the expectations of musicians and audiences with large-scale multimedia works, electro-acoustic music, dance, opera, and publishing. Most of her compositions are for the voice: solo, chamber, and choral. Her melodic music is rhythmically driven and texturally complex, rich in color, and deeply heartfelt.

While on campus, Hagen will work with Geneseo’s choirs, composition students, and several voice students individually. Assistant professor of music Monica Hershberger has also arranged for the women and gender studies program to co-sponsor a lecture by Hagen for the campus community as part of Geneseo’s 2022 Diversity Summit. “Women in Classical Music: A Conversation with Jocelyn Hagen” is on February 16, 11:45 a.m.–12:45 p.m., in Doty Recital Hall.

“I’m excited that students will get to hear from Hagen, a composer who is making her living—in the 21st century—primarily as a composer,” says Hershberger. “The world of classical music is still sometimes regarded as being under the purview of white men, and we’ll have the chance to learn about how Hagen has worked, quite successfully, to carve out a space for herself.”

Hagen’s dance opera collaboration with choreographer Penelope Freeh, Test Pilot, received the 2017 American Prize in the musical theater/opera division as well as a Sage Award for Outstanding Design. Her work has been commissioned by numerous organizations nationwide; it is independently published through JH Music, among others.