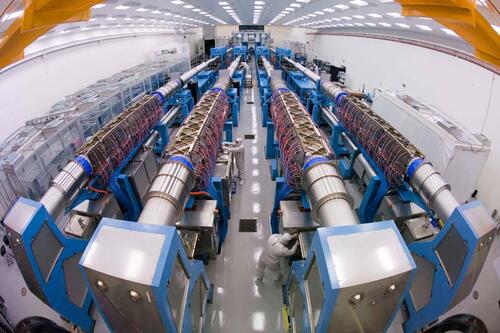 This past summer, Sarah Mandanas ’19 and Praveen Wakwella ’19 used cosmic ray muons to characterize the response of scintillators that detect neutrons produced by thermonuclear fusion reactions, like those that occur in the core of the sun and nuclear weapons. Muons share identical properties with electrons but are approximately 200 times heavier and on average only live two milliseconds before they decay.

Mandanas and Wakwella were among 21 full-time summer research assistants at Geneseo whose efforts helped scientists at the Laboratory for Laser Energetics (LLE), a U.S. Department of Energy (DOE) lab that is operated by the University of Rochester, develop better nuclear diagnostics for their investigations into High Energy-Density Physics (HEDP) and Inertial Confinement Fusion (ICF) experiments.

Geneseo has had a unique 25-year partnership with the LLE, which is the second-most powerful laser facility of its type in the world. It is only surpassed by the National Ignition Facility located at Lawrence Livermore National Laboratory in California. Established in 1970, the LLE is an international center for investigating the interactions that occur between extremely intense radiation and matter. The National Nuclear Security Administration, a division of DOE, funds the LLE.

“Geneseo has received more than $7 million in funding during the last quarter century from the Department of Energy via an LLE pass-through account. The funds paid hundreds of summer research students and dozens of faculty at Geneseo during that period,” said Stephen Padalino, Distinguished Teaching Professor of Physics and project director of the grant. “This summer our research group was composed of 21 students, 18 from Geneseo and three from Houghton College and a total of six faculty — five from Geneseo and one from Houghton.”

“When undergraduate students have the opportunity to undertake high-level focused research for prolonged periods, especially as full-time research assistants during the summer months, they become hooked on physics research,” said Padalino. “These immersive research experiences help motivate them to continue their studies in physics and engineering graduate school.”

Padalino is proud of his former students. More than 150 of his research assistants have gone on to receive advanced degrees at prestigious universities. At least a dozen have become physics professors.

Wakwella intends to pursue a doctorate in physics, likely theoretical physics. At Geneseo, he explores theory and hands-on learning through research. He's assisted Padalino with research since he was a first-year student, and his experience with the LLE research is likely to set him apart from other graduate school applicants.

“I will have already conducted research for four years when I start [graduate school],” Wakwella said, including analyzing data, setting up experiments and working in a collaborative environment. “It is a great experience.”

Mandanas plans to attend graduate school in a few years after she works for a national outreach program that motivates and encourages minorities and women to study physics. She also intends to work with minority student to help them stay in the sciences once they are in college. She is a mentor in the GROW STEM program. GROW STEM is a Geneseo group that helps support and motivate women and minorities in STEM fields at Geneseo. Anne Pellerin, assistant professor of physics and astronomy, who is an astrophysicist at the college, leads the group.