Rising Temps at the Bottom of the World 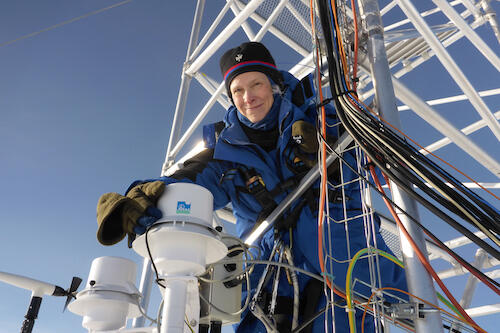 One of the hottest spots for studying climate change right now is also one of the coldest.

The vast ice sheet of Antarctica—the largest single mass of ice on the planet—is melting at a rate most scientists find alarming. That matters, in part because it signals a warming climate, but also because it presages widespread changes beyond the polar regions. Research in this unique part of the world by scientists like Dana Veron ’95 will lead to better predictions of future climate change and a clearer understanding of its profound impact across the globe.

A former physics major, Veron is now an associate professor in the Department of Geography and Spatial Sciences at the University of Delaware’s College of Earth, Ocean and Environment, with a joint appointment in its School of Marine Science and Policy. She’s back in Antarctica for the third time since 2017, collaborating with an international team of climate researchers on the multi-year CALVA project to improve the calibration and validation of satellite observations and climate modeling in the region.

Dumont d’Urville Station, the French research facility where Veron is spending two and a half months, sits on an island off the coast of Terre Adelie in East Antarctica. Even during midsummer (November–January in the Southern Hemisphere), temperatures there remain below freezing, dropping further with the continual and punishing wind chill factors.

"Much of the work involves maintenance of meteorological instruments that are easily damaged in this harsh environment," Veron says. Accurate climate modeling relies on long-term collection of high-quality data in the same location, and her work builds on a decade of measurements in the region. "I’m also collecting and analyzing data from a radar and lidar (light detection and ranging instrument) that measure clouds and snow in the atmosphere as well as helping on a project that measures snow accumulation on the coast."

Knowing when it snows—and how much, and why—at this remote research station may sound like data valuable only to a limited geographic region. In fact, the work has global implications.

"This is critical to calculating whether the glaciers in this region are shrinking or growing," Veron explains. "If the glaciers are shrinking, the ice is most likely flowing into the ocean, which then contributes to sea level rise."

Coastal erosion and flooding caused by rising sea levels can disrupt people’s lives and affect communities around the world. A recent study in Nature (published online Sept. 23, 2020) predicted a sea level rise (SLR) of eight feet by the year 2100 due to the partial reduction in the Antarctic ice sheet. Even one foot of SLR could put vulnerable, low-lying coastal cities — such as Miami or New Orleans — underwater.

"I live in a region that’s experiencing enhanced rates of sea level rise," says Veron. "The work I’m doing directly impacts our understanding of the rate of SLR that we’ll see in the mid-Atlantic."

International research into when and how the Antarctic ice sheet will react to temperature change remains urgent and ongoing. Veron herself draws encouragement from the dedicated global effort.

"It’s very inspiring to come together with people from all over the world who are so passionate about learning and caring for this incredible, unique environment, the Antarctic," she says, "which is such a critical part of our climate system."