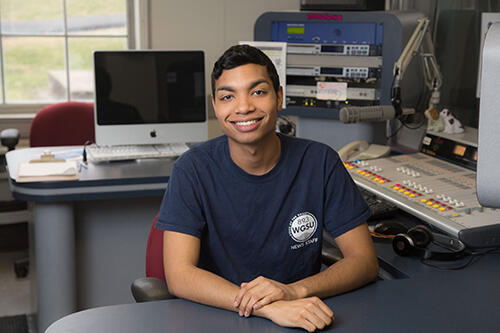 A communication major on the journalism and media track with a human development minor, Duran constantly keeps up on current events with his wide variety of studies, but also in his active involvement on campus, especially at Geneseo’s campus radio station, WGSU-FM (89.3).

After transferring his sophomore year from Hunter College in New York City, Duran started off as a news anchor at WGSU with a crew of around five people in the news department. When he became the WGSU news director his junior year, however, Duran boosted the staff to more than 25 people.

“WGSU is challenging, and I like that. It really requires a lot of critical thinking and a lot of passion, and I feel like I bring those qualities a lot into my work, especially at the radio station,” said Duran. “What I like most about it is every moment is pretty much different. I get to — especially as operations manager — dip into every different department, and I’m interested in all of them.”

Duran was promoted operations manager his senior year. He supervises and assists the department managers, oversees new programming, and is the project manager for a concert WGSU is planning for this semester.

“Nick’s a great person and student, and he has been an excellent student leader over the past two years for WGSU,” said Michael Saffran, communication lecturer and WGSU’s faculty director. “His positive attitude, all-around upbeat presence, strong work ethic and initiative, and engaging personality have been great assets to the station, and, I am sure, each will serve him well following graduation.”

Duran is a recipient of the Janie Argenta ’82 Memorial Annual Scholarship, awarded to students with an interest in communications or public relations. The scholarship is supported by an endowment established by Dixon Schwabl, a full-service advertising, marketing and public relations agency in Victor, N.Y., with additional funding from Argenta’s family and friends.

Duran has an open mind toward his career aspirations. Looking up to television host and actress Wendy Williams, he was first set on being a TV personality. After serving as the Department of Student Life event programming intern at Geneseo and working for the New York City ad agency SpotCo through Geneseo’s Winter Break Alumni Shadow Program, however, Duran has his eye on advertising or marketing.

At SpotCo, Duran shadowed Geneseo alumna Kristen Rathbun ’07, director of marketing, partnership and promotions. Shadowing Rathbun allowed Duran to combine his passion for communication with his passion for theater, as SpotCo is a full-service arts and live entertainment advertising, marketing and branding agency.

Duran’s zeal for the arts and the media came out of high school. As a freshman in high school, Duran was a part of the youth leadership and social change program Jeter’s Leaders, named after former Yankees’ short stop Derek Jeter. Duran credits Jeter’s Leaders with getting him interested in the media world.

“I became more confident in speaking with people that I don’t necessarily know personally … so those leadership things that (Jeter’s Leaders) taught me really prepared me for my future,” said Duran.

Additionally, Duran was an extra in the 13th episode of season two of “The Good Wife” as a sophomore in high school. “The Good Wife” crew was filming the episode in the music room of Duran’s high school, Xavier High School, and needed students to film a YouTube video for the characters on “The Good Wife” to watch. For Duran, this required memorizing song lyrics and learning choreography for a dance routine on set.

“It was really cool because I didn’t know any of the behind-the-scenes stuff with filming,” said Duran. “That’s also what got me into wanting to pursue acting in the future — so that’s something I want to do on the side.”

In addition to acting, Duran plans to continue his hobby of dancing after college. He is a part of Geneseo’s OriGinal Xpressions (OGX), which he describes as a great outlet to have a good time and to get away from schoolwork — one that he will miss when graduating this May.

“As much as we selfishly would love to have certain of our stellar students (Nick being one of them) around longer than their normal ‘student tenure,’ turnover in student-leadership positions is part of the nature of college radio,” said Saffran. “So, when our efforts as faculty members are complete, we instead take satisfaction in sending them off, while watching from afar their future success. I have no doubt Nick will do us — WGSU and SUNY Geneseo — proud in his post-college endeavors.”