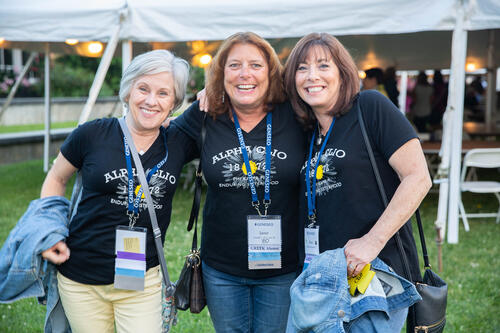 SUNY Geneseo hosted its largest alumni reunion weekend earlier this month. The College welcomed 1,800 alums and friends back to campus for two days of events. Prior to this year’s event, the largest reunion was in 2015, with just over 1,000 in attendance. Reunion 2022 marked the culmination of the college’s year-long 150th-anniversary celebration. Watch the video recap of the weekend.

This was the first alumni reunion hosted by the College since 2019. As a result, members of the classes of 1970 and 1971 returned to celebrate their 50th anniversaries with the class of 1972. Celebrations also included five-year class anniversaries and milestone anniversaries of Greek organizations, clubs, teams, and departments.

“Geneseo is a core part of me,” says Betty Sintzenich McCollum ’62, who came back with her husband, Jim McCollum, to celebrate. “It’s a magnificent school, and in my heart, I love Geneseo.”

Weekend activities included the exhibit Live On Stage at SUNY Geneseo, which featured memorable concert posters, the more than 7,000 contracts of performers from 1966 to 2021, and the personal recollections of Tom Matthews, retired student activities director and collector of many items on display. Among alums’ most-attended events were the outdoor kickoff event on the College Green and the block party on Center Street.

Returning to campus brought back memories for many alumni whose ties to Geneseo run deep. Roger Brown ’70 was a work-study student and remembered pushing new carpet rolls from the parking lot near the Greek Ago house uphill to Milne Library, which was being refurbished then. “If you need any help with the library—I have experience!” says Brown.

Colleen McNamara ’10 received the Outstanding Young Alum Award, which recognizes outstanding achievement in a chosen profession or field, or service to the College or community. McNamara teaches fifth grade at North Tonawanda Intermediate School. In 2013, she also founded Stutelage Innovations for delivering tutoring services from certified teachers to students of all ages.

Gidget Meyers Hopf ’72 received the Professional Achievement Award for achieving distinction in a chosen profession. Hopf has helped thousands of underserved individuals improve their lives and have access to opportunities for a fulfilling and productive career. From 1986 to 2020, she was president and CEO of the Association for the Blind and Visually Impaired and spearheaded the effort to expand the organization to serve other oppressed groups by founding Goodwill of the Finger Lakes, merging the missions of each organization into one, shaping the organization into one of the community’s most robust, self-sustaining not-for-profits.

Eddie Lee ’76 received the Distinguished Service Award, which recognizes an individual who has made exceptional contributions to the alumni association. In 2007, Lee joined the Geneseo Alumni Association board and was president from 2011 until its transition into the SGAA in 2015. He currently serves as a trustee on the Geneseo Village Board and is a board member of Livingston CARES. In 2017, Lee established the Eddie Lee Class of 1976 Ambassadorship for First-Generation Students through the Center for Integrated Learning at SUNY Geneseo.

Jim and Arlene Somerville received the Honorary Membership Award, which is given to a non-alumnus who has made outstanding contributions to the SGAA. Jim was associate professor of history at the College for 30 years until he retired in 1997. Arleen retired from the University of Rochester in 1999 as director of the Science and Engineering Libraries and as the chemistry librarian. They established the James and Arleen Somerville First Generation Scholarship Endowment and the James K. and Arlene N. Somerville Endowed Scholarship for sophomore chemistry and history majors.

Save the date for next year’s Reunion, June 2 and 3. Class years ending in 3 and 8 will be celebrated in addition to other milestone anniversaries.