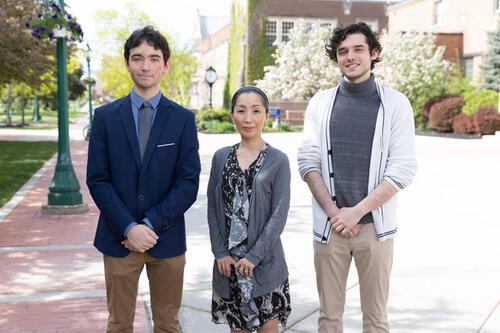 Kleinlercher is interested in a career with the US State Department as a Foreign Service officer in the East Asia region. In 2020, he served as an American delegate to the Japan-American Student Conference, a student-led exchange program focused on the study and discussion of Japan-American relations.

“During my childhood, Japan burrowed its way into my heart,” he says. “I became fascinated with Japanese popular culture through music and games and began to study the country’s language, history, and traditional arts. This passion spread to my university career, with Japan being the first foreign country I visited as a student at Rikkyo University in Tokyo.”

JET Program USA is sponsored by the Japanese government and offers a unique cultural exchange opportunity for US college alumni to meet people from all around the world though living and working in Japan. Since 1987, JET has sent more than 70,000 participants from 55 countries (including more than 35,800 Americans) to work in schools, boards of education, and government offices.

“Helping others learn is something that I take genuine enjoyment out of, and I relish the thought of teaching English and sharing my culture,” Kleinlercher notes. “I deeply desire to bring my teaching, leadership, and volunteer experiences to Japan to expand on my skills and talents while assisting the students and community members.”

Like Kleinlercher, Marrapese also plans a career with the US State Department as an East Asia Foreign Service officer. He will spend 2022–23 studying at Rikkyo University, improving his Japanese fluency and learning about Japanese customs, traditions, and culture.

“The Rikkyo program offers an opportunity to simultaneously learn about and integrate myself into Japanese culture, all the while sharing my experiences with other international exchange students,” he says. “The courses will not only teach me about Japanese language and values, but I will meet Japanese students as well. Through group work or communicating after class, I hope to develop meaningful connections with them.”

Marrapese is only the second Geneseo student to win a Freeman-ASIA scholarship (the first was Sharmila Biswa ‘21). From its inception in 2001, Freeman-ASIA has made study abroad in East and Southeast Asia possible for thousands of US undergraduates from more than 600 institutions. The scholarship program is open to US citizens or permanent residents at the time of application who receive need-based financial aid or can demonstrate a verifiable need for financial assistance.

“The United States population consists of hundreds of cultures, each just as unique and beautiful as the last, complete with individual sets of values and traditions,” Marrapese says. “I hope to bring and share my values of being an Italian American with the Japanese people, yet also represent the one value most US citizens share: honoring and cherishing diversity.”

Kleinlercher and Marrapese have been friends since taking Japanese 101 together. Since 2019, they have been members of Geneseo’s Japanese Culture Club (JCC), both serving on the club’s E-board and Kleinlercher serving as this year’s club president. JCC promotes relations between club members and the Geneseo community through the exploration of Japanese culture to act as a bridge between Japanese, American, and any culture with the intention to exchange cultural views and to dispel stereotypes.

Tomomi Tewksbury, adjunct lecturer of Japanese in the Department of Languages and Literatures, remembers Kleinlercher and Marrapese as the “best students in the class.” She praises the unique leadership qualities of the “self-motivated and reliable” Kleinlercher and “open-minded and resourceful” Marrapese. “They will gain even wider perspectives by immersing themselves in a completely different culture in Japan,” she says. “I have great hope for their future success.”