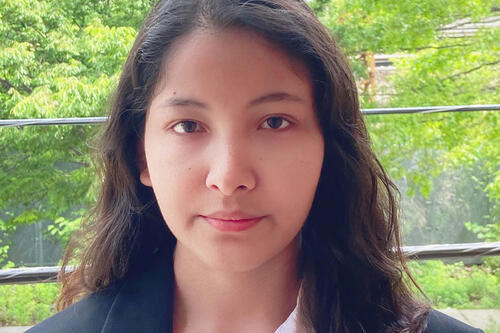 Sharmila Biswa ’21 has won a $5,000 Freeman Awards for Study in Asia (Freeman-ASIA) scholarship to spend Fall 2020 at Sogang University in Seoul, South Korea. Biswa is a psychology major from Queens, NY, and the first Geneseo student to win the award. The scholarship supports U.S.-based undergraduates who are planning to study abroad in East or Southeast Asia.

Biswa was born and grew up in a Bhutanese political refugee camp in Eastern Nepal with her family and other displaced Bhutanese. She immigrated to North America at age 10 with her parents and brother and eventually earned her U.S. citizenship. Biswa, who speaks Hindi, Urdu, and Nepali as well as English, originally became interested in Korea through K-pop music. She has continued to learn about Korean culture and language and is presently teaching herself Korean, hoping to make it her fifth language.

The Freeman-ASIA program aims to increase the number of U.S. citizens and permanent residents with first-hand exposure to and understanding of Asia and its peoples and cultures.

“As a psychology major with a sociomedical sciences minor, I am interested in studying how attitudes about mental health vary among different cultures and societies, especially the perspective of the Korean people,” Biswa said. “Sogang University offers the kind of social and clinical psychology courses that are not only applicable to my major but also give me a robust foundation for my future study of public health.”

At Geneseo, Biswa has served as secretary of the Himalayan Students Association and is a member of the Women’s Leadership Institute, the Student Senate, and Partners in Health/Engage. She hopes her semester at Songang will teach her more about the world outside Queens: “Being born stateless, with no country to call home, I was always interested in different cultures and countries. Today I am an American citizen, but my curiosity to explore has remained in me.”

From its inception in 2001, Freeman-ASIA has made study abroad in East and Southeast Asia possible for thousands of U.S. undergraduates from more than 600 institutions. The scholarship program is open to U.S. citizens or permanent residents at the time of application who receive need-based financial aid or can demonstrate a verifiable need for financial assistance.